Tuning the energy gap: A novel approach for organic semiconductors 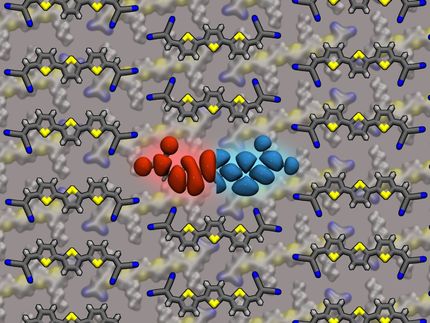 Varying the ratio of 3T molecules (foreground) and 6T molecules (indicated in the background) in the blend allows tuning the gap continuously.

What is already established for inorganic semiconductors stays a challenge for their organic counterparts: Tuning the energy gap by blending different semiconducting molecules to optimize device performance. Now, scientists from TU Dresden, in cooperation with researchers at TU Munich, as well as University of Würzburg, HU Berlin, and Ulm University demonstrated how to reach this goal.

Organic semiconductors have earned a reputation as energy efficient materials in organic light emitting diodes (OLEDs) that are employed in large area displays. In these and in other applications, such as solar cells, a key parameter is the energy gap between electronic states. It determines the wavelength of the light that is emitted or absorbed. The continuous adjustability of this energy gap is desirable. Indeed, for inorganic materials an appropriate method already exists – the so-called blending. It is based on engineering the band gap by substituting atoms in the material. This allows for a continuous tunability as, for example in aluminum gallium arsenide semiconductors. Unfortunately, this is not transferable to organic semiconductors because of their different physical characteristics and their molecule-based construction paradigm, thus making continuous band gap tuning much more difficult.

However, with their latest publication scientists at the Center for Advancing Electronics Dresden (cfaed, TU Dresden) and at the Cluster of Excellence “e-conversion” at TU Munich together with partners from University of Würzburg, HU Berlin, and Ulm University for the first time realized energy-gap engineering for organic semiconductors by blending.

For inorganic semiconductors, the energy levels can be shifted towards one another by atomic substitutions, thus reducing the band gap (“band-gap engineering”). In contrast, band structure modifications by blending organic materials can only shift the energy levels concertedly either up or down. This is due to the strong Coulomb effects that can be exploited in organic materials, but this has no effect on the gap. “It would be very interesting to also change the gap of organic materials by blending, to avoid the lengthy synthesis of new molecules”, says Prof. Karl Leo from TU Dresden.

The researchers now found an unconventional way by blending the material with mixtures of similar molecules that are different in size. “The key finding is that all molecules arrange in specific patterns that are allowed by their molecular shape and size”, explains Frank Ortmann, a professor at TU Munich and group leader at the Center for Advancing Electronics Dresden (cfaed, TU Dresden). “This induces the desired change in the material´s dielectric constant and gap energy.”

The group of Frank Ortmann was able to clarify the mechanism by simulating the structures of the blended films and their electronic and dielectric properties. A corresponding change in the molecular packing depending on the shape of the blended molecules was confirmed by X-ray scattering measurements, performed by the Organic Devices Group of Prof. Stefan Mannsfeld at cfaed. The core experimental and device work was done by Katrin Ortstein and her colleagues at the group of Prof. Karl Leo, TU Dresden.

The results of this study have just been published in the renowned journal "Nature Materials". While this proves the feasibility of this type of energy-level engineering strategy, its employment will be explored for optoelectronic devices in the future.