Chemist strengthens the catalyst for oxidiazoles synthesis by 3 times 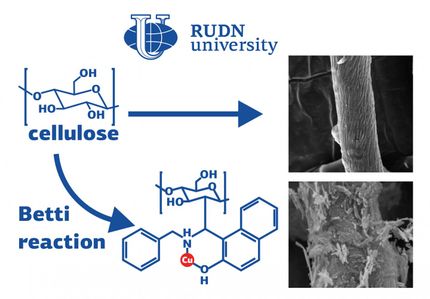 RUDN and Shahid Beheshti University (SBU) chemist proposed a protocol for converting cellulose into a catalyst for the synthesis of oxadiazoles. The new approach makes the catalyst 3 times more stable compared to the same catalyst obtained by the traditional method.

RUDN and Shahid Beheshti University (SBU) chemist proposed a protocol for converting cellulose into a catalyst for the synthesis of oxadiazoles. The new approach makes the catalyst 3 times more stable compared to the same catalyst obtained by the traditional method. The results are published in Carbohydrate Polymers

One of the directions of green chemistry is the biopolymers functionalization. Chemists modify polymers obtained from plants and animals -- they add functional molecular groups to them to get useful substances. For example, the catalysts for oxadiazoles synthesis are created from cellulose. They are necessary to produce polymers, dyes, medicines, and photographic materials. To do this, metals are added to the structure of cellulose. However, during use, especially at high temperatures, metal ions are leaching. It causes the reduction of catalytic activity, and environmental pollution. The RUDN University and SBU chemist with his colleagues from Iran created a method of cellulose functionalization, to strengthen the connection of cellulose with metal ions and prevents them from leaching.

"Cellulose as the eco-friendly, non-toxicity, cost-effectively, and renewability features biopolymer was employed in a three-component Betti reaction since its ability to generate functional ligands on the cellulose to complex with Cu(II)", Dr. Ahmad Shaabani from RUDN University and SBU.

Chemists used the Betti reaction, which is the addition of functional groups to phenols using aldehydes and aromatic amines. RUDN University researchers obtained dialdehyde cellulose, for this they mixed 0.5 g of cellulose and 0.01 grams of potassium periodate in water. The solution was mixed at 85? for 12 hours. After that, the reaction product was filtered out, washed with water, and left to dry in a vacuum at 70?. The resulting dialdehyde was used in the Betti reaction. To do this, the chemists added 0.11 g of benzylamine to the dialdehyde and dissolved them in acetic acid, stirring at room temperature for 4 hours. Then naphthol was added to the mixture and mixed for another day. The resulting product was filtered, washed, and dried in a vacuum at 50?. Finally, a similar procedure was repeated, mixing the functionalized cellulose with copper acetate. As a result, a Cu(II)@DAC-Betti catalyst was obtained.

RUDN University and SBU chemists studied the obtained cellulose using spectroscopy and nuclear magnetic resonance. Its structure was examined under a scanning electron microscope. For comparison, the scientists took a copper-modified cellulose, which was obtained according to a standard protocol, without using the Betti reaction (Cu (II)@cellulose). The electron microscope images show that, in comparison with the usual one, the cellulose obtained through the Betti reaction does not have a smooth structure -- it has many outgrowths that firmly hold on to each other and to the cellulose fibers. Chemists compared how firmly the functional elements of cellulose obtained by new and standard methods hold. It turned out that the Betti reaction makes the modified cellulose 3 times more stable -- at a temperature of 600?, 17.2% of its mass was preserved, compared with 6.1% for cellulose obtained by the standard method.

"The result showed a high residual mass for Cu(II)@DAC-Betti, which established a high amount of Cu(II) loading in Cu(II)@DAC-Betti in comparison with Cu(II)@cellulose, thus reveals an efficiency of Betti functionalization in complexing of Cu(II) ions", Dr. Ahmad Shaabani from RUDN University and SBU.