Infrared Held in a Pincer 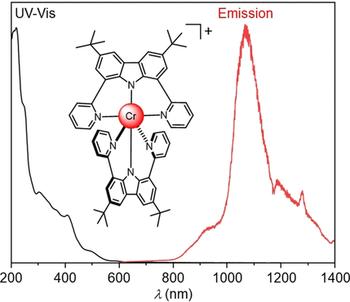 Many applications, from fiber-optic telecommunications to biomedical imaging processes require substances that emit light in the near-infrared range (NIR). A research team in Switzerland has now developed the first chromium complex that emits light in the coveted, longer wavelength NIR-II range. In the journal Angewandte Chemie, the team has introduced the underlying concept: a drastic change in the electronic structure of the chromium caused by the specially tailored ligands that envelop it.

Many materials that emit NIR light are based on expensive or rare metal complexes. Cheaper alternatives that emit in the NIR-I range between 700 and 950 nm have been developed but NIR-II-emitting complexes of non-precious metals remain extremely rare. Luminescence in the NIR-II range (1000 to 1700 nm) is, for example, particularly advantageous for in vivo imaging because this light penetrates very far into tissues.

The luminescence of complexes is based on the excitement of electrons, through the absorption of light, for example. When the excited electron drops back down to its ground state, part of the energy is emitted as radiation. The wavelength of this radiation depends on the energetic differences between the electronic states. In complexes, these are significantly determined by the type and arrangement of the ligands bound to the metal.

In typical chemical (covalent) bonds, each partner brings one electron to share in a bonding pair; in many complexes both of the electrons come from the ligand. However, the line between these types of bonds is fluid: metal–ligand bonds can have partial covalent character (nephelauxetic effect). As a consequence, the energy of certain excited states is reduced, giving the emitted radiation a longer wavelength. This has been observed for polypyridine ligands, which cause the ruby red emission of trivalent chromium (CrIII) in complexes to shift into the NIR-I range.

In order to increase the covalence of the metal–ligand bond and further increase the wavelength, Narayan Sinha in a team led by Claude Piguet and Oliver S. Wenger at the Universities of Basel and Geneva (Switzerland) switched from classic polypyridine ligands to a newly tailored, charged, tridentate chelate ligand. The term chelate is derived from the Greek word for the pincer of a crab, and tridentate means that the ligand has three binding sites with which it grabs the central metal ion like a pincer.

In the resulting new complex, the CrIII ion is surrounded on all sides by two tridentate charged chelate ligands to form an octahedral shape. This results in a drastically altered, unusual electronic structure with a high electron density on the CrIII. In the axial direction, charge transfer takes place from the ligands to the metal, but in the equatorial plane of the octahedron, charge transfer moves from the metal to the ligands. The combined “push” and “pull” interactions likely have a strong influence on the spectroscopically relevant electrons of the CrIII—the key to the NIR-II emissions of the new complex.