The EU Green Deal is a game changer for the process industry, but only very few companies know the rules of the game. 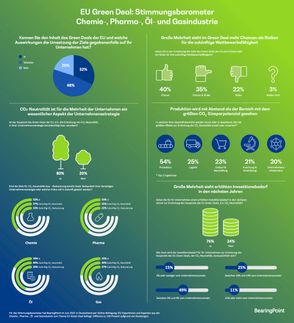 Many companies in the chemical, pharmaceutical, oil and gas industries see more opportunities than risks for their own future competitiveness in the European Union's Green Deal. However, only one third of the companies are even aware of the exact objectives of the Green Deal and quite a few are still in the dark here, as the sentiment barometer of the management and technology consultancy BearingPoint shows.

While a third of the companies surveyed are well aware of the Green Deal, for 48 percent the contents are only partially clear. And a full 20 percent say they are not at all familiar with the EU Commission's plans.

Those respondents who are familiar with the contents of the EU's Green Deal see the implementation of these goals as an opportunity (40 percent) for future competitiveness, for example through the definition of new or adapted business models that meet the requirements of the Green Deal. At the same time, 35 percent see both an opportunity and a risk in the implementation of the EU Green Deal objectives. Only 22 percent see it exclusively as a risk.

Jens Raschke, global head of Chemicals, Life Sciences & Resources at BearingPoint, says: "With a view to the EU's Green Deal, companies are well advised to identify opportunities for future competitiveness now, to define and implement suitable measures and to minimise risks. A comprehensive assessment of the Green Deal including scenario analysis provides an important cornerstone in this respect. Particularly with regard toCO2 neutrality or reduction, it is advisable to include these aspects in one's own corporate strategy as early as possible in order to be able to sustainably strengthen the goals forCO2 neutrality and the associated future competitiveness."

For 80 percent,CO2 neutrality is an essential aspect that should be included in their own corporate strategy. On average, however, only 38 percent have already firmly anchored this in their current corporate strategy. The remaining 42 percent plan to do so in the future, but to varying degrees - either with a focus onCO2 neutrality orCO2 reduction.

Despite the low level of anchoring ofCO2 neutrality in the corporate strategy so far, 60 percent of the participants state that they are strongly influenced in their strategic and operational decision-making processes with regard to achievingCO2 neutrality.

Production is seen by far as the area with the greatestpotential for CO2 savings.

Of the companies surveyed, 36 percent state that they have not (yet) dealt with the issue ofCO2 neutrality or do not see any relevant need for action. In 28 percent of the companies, especially in the chemical and pharmaceutical industries, the topic is already being addressed. Six percent believe that the excessive expense involved in implementingCO2 neutrality does not justify the expected return.

Jens Raschke: "A quarter of all the companies we surveyed currently rate their own relevance within theCO2 ecosystem as low. However, in our view, this assessment should be urgently reviewed in order to secure their own future competitiveness in the long term. Society, business and politics expect the chemical, pharmaceutical, oil and gas industries in particular to make far-reaching changes to existing processes and business models in order to achieveCO2 neutrality. We recommend that companies review their current business model with regard to future requirements, identify use cases to sustainably strengthen their competitiveness and implement appropriate measures in the relevant areas.