Microplastics: A Trojan Horse for Metals 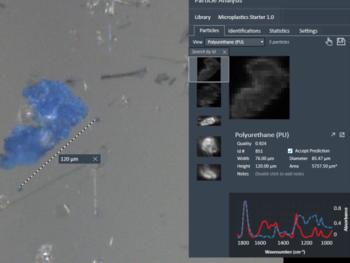 While only PE and PET were investigated in the laboratory study described here, the researchers found numerous other types of plastic, such as polyurethane (left in picture), in the environmental samples examined. Using state-of-the-art instruments and digital methods, these are directly identified and measured (right picture).

The fact that microplastics can accumulate organic pollutants from the environment and transport them has been known for some time. What is new, however, is that metals can also be transported in this manner. In addition, the smaller the particles, the greater the metal accumulation on the plastic. This has been demonstrated by scientists at the Helmholtz-Zentrum Hereon in a new study.

Scientists worldwide have already demonstrated the alarming ecological ubiquity and longevity of plastic particles. The particles measure between one micrometer and a half centimeter in size. They develop in part when larger plastic components break apart in the sea or wind up in the rivers and subsequently in the ocean directly from wastewater stemming from land. Microplastics are toxic in very high concentrations. In addition, they can also accumulate, transport and release other pollutants. While data has already been published on organic pollutants in this context, there is little known about the interactions between the microplastic particles floating in the water and dissolved metals. This is why scientists from the Institute of Coastal Environmental Chemistry at the Helmholtz-Zentrum Hereon have now systematically studied these interactions in the laboratory.

The team, which includes first author Dr. Lars Hildebrandt, studied the accumulation of fifty-five different metals and semi-metals on polyethylene and polyethylene terephthalate particles, measuring 63 to 250 micrometers in size. “In regard to water polluted by plastics, the two types of plastics we studied play a vital role,” says environmental chemist Hildebrandt. “This is due to their wide range of application and the associated high production volumes. Most shopping bags, for example, are made of polyethylene (recycling code 4, LDPE), and plastic drinking bottles are almost without exception made of polyethylene terephthalate (recycling code 1, PET).”

The smaller the particle, the stronger the accumulation

“In the study, we determined that the accumulation becomes stronger when the particles become smaller and that there are significant differences between the various elements (metals and semi-metals) in terms of the extent of enrichment,” says coauthor Dr. Daniel Pröfrock, department head of Inorganic Environmental Chemistry at Hereon. Some metals, or more precisely their ions, such as chromium, iron, tin and the rare earths attached themselves almost entirely to the microplastics. Others, such as cadmium, zinc and cooper, showed almost no accumulation on the plastic over the entire test period. In addition, the polyethylene particles showed significantly greater accumulation than the polyethylene terephthalate particles.

In the second phase of the test, the Hereon scientists could show that the particles loaded with metals or semi-metals almost completely released the respective metal contents again under chemical conditions, such as those that prevail in the digestive tract. “Our test set-up in the laboratory was actually simplified and without model organisms. Nonetheless, the results provide important evidence that microplastic particles, when absorbed by the body, act as a type of trojan horse for metals and that these metals can possibly be introduced into organisms to a greater extent in that way,” says Lars Heldebrandt, drawing his initial conclusion.

Further studies are now being conducted to determine how other plastics frequently found in the environment behave and what influence the age of the particles and their weathering state have on the accumulation and release processes.