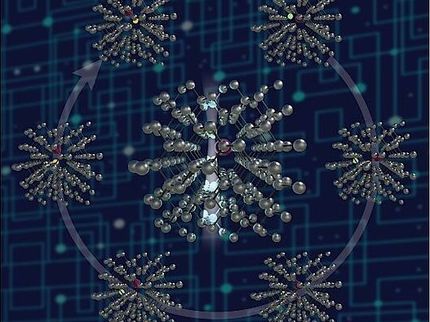 Indirect exchange mechanism for the electron-beam manipulation of bismuth or antimony dopants in silicon based on computer simulations. The crimson sphere is a bismuth atom, while yellow and green spheres are respectively its nearest and next-nearest silicon neighbours.

Researchers at the University of Vienna’s Faculty of Physics in collaboration with colleagues from the Oak Ridge National Laboratory in the USA have uncovered a non-destructive mechanism to manipulate donor impurities within silicon using focused electron irradiation. In this novel indirect exchange process not one but two neighbouring silicon atoms are involved in a coordinated atomic "waltz", which may open a path for the fabrication of solid-state qubits. The results have been published in the Journal of Physical Chemistry.

Engineering materials at the atomic scale is an ultimate goal of nanotechnology. Well-known examples of atom manipulation with scanning tunneling microscopy range from the construction of quantum corals to rewritable atomic memories. However, while established scanning probe techniques are capable tools for the manipulation of surface atoms, they cannot reach the bulk of the material due to their need to bring a physical tip into contact with the sample and usually require operation and storage at cryogenic temperatures.

Recent advances in scanning transmission electron microscopy (STEM) have raised interest in using an electron beam for atom manipulation, and Vienna has emerged as one of the leading hubs of this research worldwide. "The unique strength of this technique is its ability to access not only surface atoms but also impurities within thin bulk crystals. This is not only a theoretical possibility: the first proof-of-principle manipulation of bismuth dopants in silicon was recently demonstrated by our US collaborators," Toma Susi explains.

The new joint work is a systematic modelling study on the electron-beam manipulation of group V dopant elements within silicon. Crucially, the Vienna team uncovered a new kind of mechanism they call indirect exchange, where not one but two neighbouring silicon atoms are involved in a coordinated atomic "waltz", which explains how electron impacts can move these impurities within the bulk of the silicon lattice. "While this mechanism only works for the two heavier donor elements, bismuth and antimony, it was crucial to find that it is non-destructive, as no atoms need to be removed from the lattice," Alexander Markevich adds.

As a further experimental advance, the team was for the first time able to demonstrate the possibility to manipulate antimony impurities in silicon using STEM. The precise positioning of dopant atoms within crystal lattices could enable novel applications in areas including solid-state sensing and quantum computation. This may have exciting implications, as Susi concludes: "Very recently, antimony dopants in silicon were suggested as promising candidates for solid-state nuclear spin qubits, and our work may open a path for their deterministic fabrication."