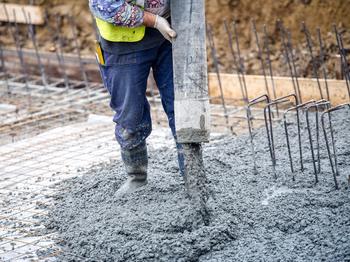 Researchers at the Martin Luther University Halle-Wittenberg (MLU) in Germany and the Brazilian University of Pará have developed a climate-friendly alternative to conventional cement. Carbon dioxide (CO2) emissions can be reduced during production by up to two thirds when a previously unused overburden from bauxite mining is used as a raw material. The alternative was found to be just as stable as the traditional Portland cement. The results were published in "Sustainable Materials and Technologies".

Houses, factories, staircases, bridges, dams - none of these structures can be built without cement. According to estimates, almost six billion tonnes of cement were produced worldwide in 2020. Cement is not only an important building material, it is also responsible for around eight per cent of manmade CO2 emissions. "Portland cement is traditionally made using various raw materials, including limestone, which are burned to form so-called clinker," explains Professor Herbert Pöllmann from MLU’s Institute of Geosciences and Geography. "In the process, the calcium carbonate is converted into calcium oxide, releasing large quantities of carbon dioxide." Since CO2 is a greenhouse gas, researchers have been looking for alternatives to Portland cement for several years.

One promising solution is calcium sulphoaluminate cement, in which a large portion of the limestone is replaced by bauxite. However, bauxite is a sought-after raw material in aluminium production and not available in unlimited quantities. Together with Brazilian mineralogists, the MLU team has now found an alternative to the alternative, so to speak: They do not use pure bauxite, but rather an overburden: Belterra clay. "This layer of clay can be up to 30 metres thick and covers the bauxite deposits in the tropical regions of the earth, for example in the Amazon basin," explains Pöllmann. "It contains enough minerals with an aluminium content to ensure good quality cement. It is also available in large quantities and can be processed without additional treatment." Another advantage: The Belterra clay has to be removed anyway, so it does not have to be extracted only for cement production.

Even though cement cannot be entirely produced without calcium carbonate, at least 50 to 60 percent of the limestone can be replaced by Belterra clay. The process has another environmentally relevant advantage: the burning process only requires 1,250 degrees Celsius (2282° Fahrenheit) - 200 degrees (392° Fahrenheit) less than for Portland cement. "Our method not only releases less CO2 during the chemical conversion, but also when heating the rotary kilns", says Pöllmann. By coupling these effects, CO2 emissions can be reduced by up to two thirds during cement production.

In extensive laboratory tests, the mineralogists were able to prove that their alternative cement meets all the quality requirements placed on traditional Portland cement. Further research projects will now investigate whether there are also overburden sources in Germany suitable for cement production.