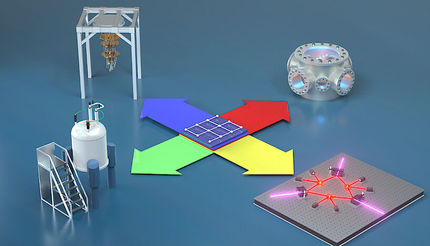 Multiple quantum computers using different hardware are tested against each other by letting them perform random-looking calculations, which are linked by a hidden graph structure.

Quantum computers become ever more powerful, but how can we be sure that the answers they return are accurate? A team of physicists from Vienna, Innsbruck, Oxford, and Singapore solves this problem by letting quantum computers check each other.

Quantum computers are advancing at a rapid pace and are already starting to push the limits of the world's largest supercomputers. Yet, these devices are extremely sensitive to external influences and thus prone to errors which can change the result of the computation. This is particularly challenging for quantum computations that are beyond the reach of our trusted classical computers, where we can no longer independently verify the results through simulation. "In order to take full advantage of future quantum computers for critical calculations we need a way to ensure the output is correct, even if we cannot perform the calculation in question by other means," says Chiara Greganti from the University of Vienna.

Let the quantum computers check each other

To address this challenge, the team developed and implemented a new cross-check procedure that allows the results of a calculation performed on one device to be verified through a related but fundamentally different calculation on another device. "We ask different quantum computers to perform different random-looking computations," explains Martin Ringbauer from the University of Innsbruck. "What the quantum computers don't know is that there is a hidden connection between the computations they are doing." Using an alternative model of quantum computing that is built on graph structures, the team is able to generate many different computations from a common source. "While the results may appear random and the computations are different, there are certain outputs that must agree if the devices are working correctly."

A simple and efficient technique

The team implemented their method on 5 current quantum computers using 4 distinct hardware technologies: superconducting circuits, trapped ions, photonics, and nuclear magnetic resonance. This goes to show that the method works on current hardware without any special requirements. The team also demonstrated that the technique could be used to check a single device against itself. Since the two computations are so different, the two results will only agree if they are also correct. Another key advantage of the new approach is that the researchers do not have to look at the full result of the computation, which can be very time consuming. "It is enough to check how often the different devices agree for the cases where they should, which can be done even for very large quantum computers", says Tommaso Demarie from Entropica Labs in Singapore. With more and more quantum computers becoming available, this technique may be key to making sure they are doing what is advertised

The research aiming to make quantum computers trustworthy is a joint effort of university researchers and quantum computing industry experts from multiple companies. "This close collaboration of academia and industry is what makes this paper unique from a sociological perspective", shares Joe Fitzsimons from Horizon Quantum Computing in Singapore. "While there’s a progressive shift with some researchers moving to companies, they keep contributing to the common effort making quantum computing reliable and useful."