High-speed modulation thanks to crystal symmetry 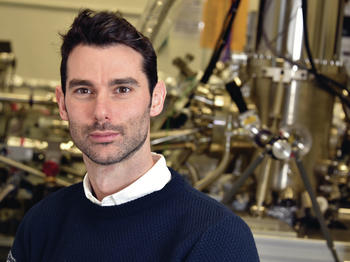 A team led by Prof. Giancarlo Soavi has developed a method for non-linear signal modulation.

Nonlinear optics is of paramount importance in numerous fields of science and technology, in particular for second harmonic generation, namely the process of frequency doubling of a light beam. For instance, this process turns invisible infrared light into the visible light cursor of a laser pointer. In spectroscopy, this method allows to reach new wavelengths that are otherwise not available using conventional laser sources.

There are also important applications in the field of photonic data transmission, quantum communication and sensing technology. As an example, by switching on and off the second harmonic conversion efficiency one can store any information into a light beam. To fully exploit the potential of this technology, the second harmonic modulation must be as fast and efficient as possible. Physicists and chemists from Friedrich Schiller University Jena, together with colleagues from the Politecnico di Milano, have now developed a particularly effective method, as reported in the scientific journal “Nature Photonics”.

To generate a second harmonic signal, the Jena researchers led by Prof. Giancarlo Soavi, whose working group is part of the European Union-funded research initiative “Graphene Flagship” and the Jena Collaborative Research Centre “Nonlinear Optics down to Atomic scales” (CRC 1375 “NOA”), focus ultra-short laser pulses onto a 2D material. Such ultrathin materials, consisting of only one layer of atoms, are particularly suited for nanoscale devices, as their flexibility and mechanical properties make them easy to integrate on photonic platforms.

With their new method, Soavi and his colleagues combine the strengths of two different approaches: “On one hand, one can change the nonlinear optical properties of a material by applying an external electric field (electrical modulation). This approach gives large modulation of the second harmonic conversion efficiency but it is relatively slow,” explains Prof. Soavi. “On the other hand, one can excite the material with a second light pulse (optical modulation). This “control” pulse can perturb the nonlinear optical response of the sample on a very fast timescale, as light is faster than electric currents, but the modulation of the second harmonic achieved in this case is rather weak.” With their new method, the Jena scientists combine the advantages of both electrical and optical modulation.

The symmetry of crystals helps

The 2D material used for the experiments is decisive for this approach. “We use the so called transition metal dichalcogenide monolayers – atomically thin semiconductors that have very special optical properties due to their crystal symmetry,” says Sebastian Klimmer, who researched the topic for his Master’s thesis. Thanks to these properties, it is possible to manipulate the polarization – or oscillation plane – of the emitted second harmonic with the help of a second light pulse and thereby to switch the detected signal on and off quickly and efficiently.

In contrast to previously reported purely optical approaches, the two pulses used in this work are polarized perpendicularly to each other. As long as both pulses strike the extremely thin material separately, the light emitted oscillates along a plane that is blocked by a polarization filter (OFF-state). However, as soon as the two laser pulses overlap, the polarization of the signal rotates by 90 degrees and can thus pass through the filter unperturbed (ON-state). “The special symmetry of the investigated material – molybdenum disulphide – enables efficient optical modulation and therefore switching of the second harmonic generation process in the femtosecond range,” says Prof. Soavi.

This development achieved by the CRC 1375 “NOA” and the “Graphene Flagship” research initiative may pave the way for novel types of integrated high-speed frequency converters that can be used, for example, in fast data transmission.