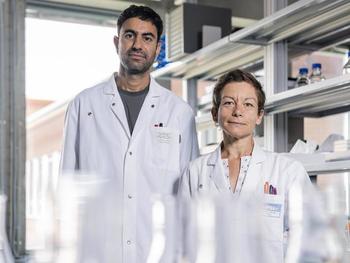 Researchers at the Paul Scherrer Institute PSI have identified a chemical compound that is probably suitable as an active agent against several single-cell parasites. These include the pathogens that cause malaria and toxoplasmosis. The target of the promising substance is the protein tubulin: it helps cells to divide and is thus also indispensable for the reproduction of the parasites. The study appeared in the journal EMBO Molecular Medicine.

The idea behind this comes from tumour research: by blocking the protein tubulin in cancer cells, the cells are prevented from dividing successfully - and thus also from multiplying. Doctors have long used this principle successfully in chemotherapy, administering tubulin-inhibiting substances to patients.

PSI researchers Natacha Gaillard and Ashwani Sharma from the Laboratory of Biomolecular Research have now extended the concept to unicellular parasites, including the causative agent of malaria (Plasmodium sp.) and toxoplasmosis (Toxoplasma gondii). That's because their cells also need tubulin for cell division. "When this protein stops working as it should, it hits the parasite hard," says researcher Ashwani Sharma. "Therefore, tubulin is a good drug target. In tumor research, the protein has been known in this regard for a very long time, but in parasitology it has received little attention."

The causative agents of malaria and toxoplasmosis belong to the apicomplexa, a group of unicellular parasites belonging to the eukaryotes. Their cells have a true nucleus and they undergo both sexual and asexual stages of reproduction. Apicomplexa use humans or animals as hosts or intermediate hosts. The infectious diseases they cause sicken many millions of people each year.

In search of targets

All eukaryotes, from amoebae to humans, produce the protein tubulin. In the form of long filaments, it spans the cells as a kind of scaffold. During cell division, it forms the so-called spindle apparatus, which pulls the chromosomes apart and distributes them to two daughter cells.

The protein differs from creature to creature in a few, but possibly important, places. In order to find active substances against the specific protein of eukaryotic unicellular parasites and to block it, the exact structure of the protein must be known.

The PSI researchers therefore isolated tubulin from the cells of the ciliated animal Tetrahymena thermophila. "Its protein is virtually identical to the one in Apicomplexa," explains scientist Natacha Gaillard. "And that saves us from having to work with malaria pathogens in the lab."

Using the Swiss Synchrotron Light Source SLS and electron microscopy, the researchers deciphered the protein's molecular structure. Then they looked for a chemical compound that could inhibit the protein. A substance database provided five candidates as potential active ingredients - in the laboratory, one chemical compound was confirmed to be effective. The researchers christened it "parabulin." "It prevents tubulin from forming long stable protein filaments. So it also blocks successful cell division," Gaillard says. Parabulin blocks the protein at the exact site where cancer drugs dock in human tubulin by analogy.

Hope for a future drug

The PSI cooperation partners from the University of California in Irvine, USA, tested the compound on Toxoplasma gondii in human cells. In fact, the parasite was virtually unable to reproduce. On human cells, on the other hand, parabulin had virtually no effect. "This is a good sign: The substance apparently acts exclusively on the tubulin of the parasite - a basic requirement for it to be used as a drug against infectious diseases," explains Sharma.

It seems reasonable to assume that parabulin is not only effective against Toxoplasma gondii, but against all representatives of the Apicomplexa, including the causative agent of malaria. The PSI has now filed a patent and plans to test parabulin further in the laboratory in order to develop it into a drug with the help of the pharmaceutical industry.