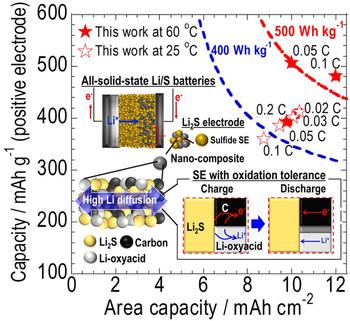 The oxidation onset voltages (OOVs) of several solid electrolytes (SEs) were determined for all-solid-state Li/S batteries with Li2S as a high-capacity active material. The OOVs of SEs must exceed that of Li2S by more than 0.2 V to achieve high capacity. Developed electrodes using Li2S and pseudobinary Li-oxyacid salts achieved high areal capacities in all-solid-state battery.

Recent advances on materials in development since the 1980’s at Osaka Prefecture University (OPU) bring all-solid-state batteries (ASSBs) a step closer towards reality.

ASSBs use a solid electrolyte (SE) that separates the energy-generating parts (cathodes and anodes) and has attracted attention as a safer, higher energy and power alternative to the inflammable liquid or gel electrolytes found in lithium-ion batteries. However, one major issue has been achieving ASSB energy densities that can match and potentially exceed those of Li-ion batteries.

In past work done at OPU, ASSBs with a cathode made up of a solid solution of lithium sulfide (Li2S) and lithium iodide were produced and found that during charge and discharge, the lithium iodide functioned as an ionic conduction path in the Li2S. This resulted in a higher energy capacity of the battery, suggesting that the key to increasing capacity was found in the nature of the lithium iodide conductor.

The team set out to explore this relationship by focusing on the electrochemical window of SEs – something that had been overestimated in previous calculations.

Prof. Hayashi, together with a research team from the Department of Applied Chemistry, OPU Graduate School of Engineering, employed linear sweep voltammetry to investigate the oxidation onset voltages (OOVs) of SEs. They found that the OOVs of SEs employed in ASSBs with Li2S positive electrodes must exceed that of the Li2S by 0.2 V to achieve high energy capacity.

“Finding the acceptable electrochemical window for high-capacity charges is only half the solution”, states Associate Professor Atsushi Sakuda. “The next step was to discharge all this energy, which depended on the ionic conductivity of the SE”.

Here, the team explored the oxidation stabilities of several lithium salts and found that nanocomposite electrode composed of Li2S and pseudobinary Li-oxyacid salts, which had been discovered by research done in 1987 by the university’s current President Masahiro Tatsumisago, showed the best performance in the reported all-solid-state Li2S batteries. “We developed a Li2S-based nanocomposite cathode with a SE having both resistance to electrochemical decomposition and relatively high ionic conductivity”, states Dr. Takashi Hakari.

The insight obtained from this study allowed the team to fabricate a high capacity Li2S-based nanocomposite cathode using a solid electrolyte with oxidation tolerance. The next step for the research team is to turn this creation into an all-solid-state lithium-sulfur battery with twice the energy density of a lithium-ion battery.