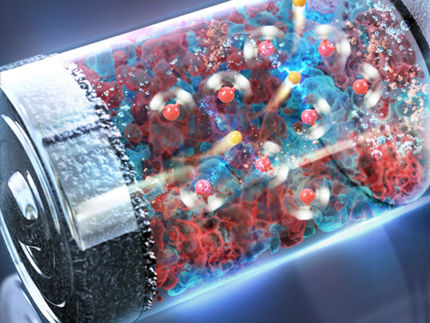 Lithium-ion batteries are notorious for being a fire hazard due to their flammable organic electrolytes. As such, there has been much effort to utilize water-based electrolytes as a safer alternative. However, this is hampered by the problem of water molecules undergoing electrolysis into hydrogen and oxygen within the battery, which causes various problems such as poor efficiency, short device longevity, and safety issues.

To suppress unwanted electrolysis of water, it is necessary to dissolve the salts at extremely high concentrations in aqueous Li-ion batteries. Both volume and weight of salt in these electrolytes are higher than that of water, and hence they are referred to as water-in-salt electrolytes (WiSE). As a result, the viscosity of the electrolyte is very high, which in theory should hinder the transport of lithium ions. This is pretty much expected according to the conventional theory, which predicts the water-electrolyte system to exist as a homogeneous mixture in this superconcentrated environment. In other words, all water molecules should be interacting with ions, and thus hydrogen bonds among water molecules are completely disrupted.

However, Li-ion transport tends to be unexpectedly fast in these highly viscous WiSEs. Previous studies used Raman spectroscopy and molecular dynamics (MD) simulations to elucidate the extended electrochemical stability window of the water molecules in WiSE by observing the isolated water molecules that are completely surrounded by ions inside of these super-concentrated aqueous electrolytes. Still, it was not sufficient to explain the rapid lithium-ion transport within the WiSE.

Recently, a research team at the Center for Molecular Spectroscopy and Dynamics (CMSD) within the Institute for Basic Science (IBS) and Daegu Gyeongbuk Institute of Science & Technology (DGIST) have uncovered the correlation between water dynamics and Li-ion transport. They used polarization selective infrared pump-probe spectroscopy (IR-PP) and dielectric relaxation spectroscopy (DRS) to observe water molecules in a super-concentrated salt solution.

IR-PP is time-resolved nonlinear spectroscopy that can detect vibrational and rotational dynamics of an individual water molecule, which is useful for determining its hydrogen bonding partner. Meanwhile, DRS serves as a complementary tool to measure the concentration of chemical species present in the electrolyte and provide clues to the collective properties of the solution.

Using these techniques, the team observed that a significant amount of bulk-like water in WiSE exhibits the properties of pure water. This means that even under super-high salt concentrations (28 m), there are still “pockets” of bulk water molecules that form hydrogen bonds with other water molecules, which indicate heterogeneity in the solvation structure in nanoscales. In addition, it turned out that the rotational dynamics of bulk-like water are faster than that of anion-bound water. These observations identified the cause of fast Li-ion transport relative to the large viscosity of superconcentrated aqueous electrolytes.

The researchers emphasized, “This study is the first case of explaining the observation of the dynamics of water molecules in superconcentrated aqueous electrolytes at a molecular level," and "It is possible because IR-PP has the ability to distinguish and observe water molecules according to their hydrogen-bonding partner.”

Prof. CHO Min Haeng, the Director of CMSD said, “Water played an important role in Li-ion transport mechanisms, and not just the dissolved salts in superconcentrated aqueous electrolytes. This research is expected to provide design principle for other superconcentrated electrolytes at the molecular level that can promote the transport of Li-ions.”