Binary mesocrystals from the nanobuilding kit 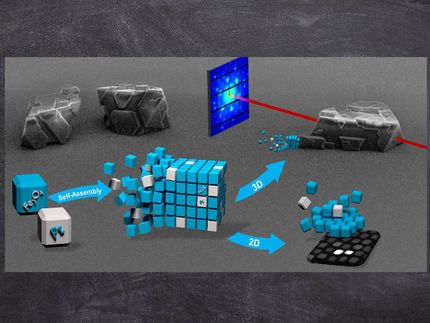 Research team led by Constance produces three-dimensional mesocrystals from two different types of nanocrystals - platinum and magnetite - for the first time. This lays the foundation for the synthesis of novel nanostructured solids with previously unexplored properties.

Mesocrystals are a class of solids formed by the regular arrangement of nanocrystals. These are tiny nanoparticles that have unique properties due to their small size. In mesocrystals, they take on a highly organized, superordinate form in a densely packed lattice. A German-Swiss research team led by Prof. Dr. Helmut Cölfen, a chemist from Constance, has now succeeded in synthesising particularly complex mesocrystals with largely unknown chemical and physical properties and in elucidating their structure.

The synthesis route and structural evidence of the binary 3D mesocrystals from platinum and magnetite nanocrystals have just been published in the journal Angewandte Chemie. The results of the study represent the first step towards a possible "modular system", with which the properties of different nanocrystals could be combined in a targeted manner in the future and transferred from the nano- to the more manageable micro-world - with a multitude of possible advantages and applications.