The next big thing: A new technology for directly converting carbon dioxide into pure formic acid 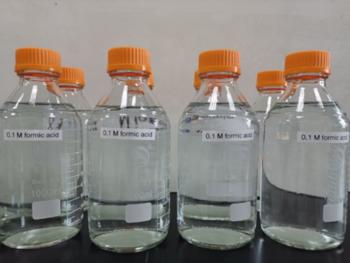 Anthropogenic emissions of carbon dioxide bring a series of climatic and environmental problems including global warming. Artificially upcycling of carbon dioxide into value-added fuels and chemicals, powered by "green electricity" of renewable energy, provides an elegant route to close the anthropogenic carbon cycle.

However, the obtained products of carbon dioxide conversion are usually diversified, making it a challenge to derive a single product, for example, formic acid, an important commodity used in a number of industrial processes. Another obstacle lies in the obtained liquid products that are usually mixed with electrolyte salts, requiring the downstream separation and purification process. In this regard, how to reduce carbon dioxide into a single and pure liquid product remains an urgent technical problem towards industrialization of carbon dioxide electrolysis.

In a Nature Nanotechnology paper published on Dec 14th, a collaborative team led by Professor ZENG Jie of the University of Science and Technology of China, Professor XIA Chuan of the University of Electronic Science and Technology of China, and researcher XIAO Jianping of Dalian Institute of Chemical Physics, developed an innovative system to utilize renewable electricity to directly reduce carbon dioxide into pure formic acid.

The researchers developed a copper-based single atom alloy catalyst to realize the exclusive conversion of carbon dioxide into formic acid. What is more exciting is that the researchers designed and constructed a novel electrochemical device based on solid-state electrolyte. With the developed catalyst and the reactor device, pure formic acid liquid fuels could be directly and continuously generated with carbon dioxide and water as raw feedstocks. On a laboratory scale, the device realized a continuous production of 8 liters of 0.1 M pure formic acid solution. Such a procedure generates formic acid solution which could be directly used without downstream separation and purification processes, exhibiting great potential for practical application.

This work is expected to promote the industrialization process of carbon dioxide upcycling driven by green electricity, which implicates a great significance on achieving the circular carbon economy.