The path to clean catalysis

ERC Starting Grant for catalysis without rare or toxic metals 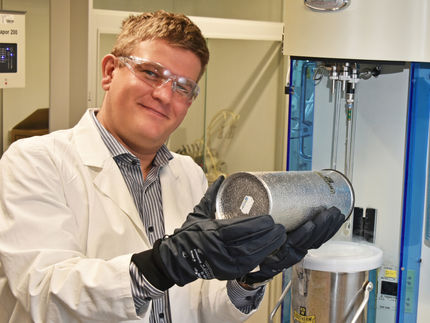 Chemistry professor Martin Oschatz of the University of Jena (Germany) has been awarded a coveted Starting Grant by the European Research Council to support his pioneering work, the ERC announced. This grant, which provides up to 1.5 million euros over five years, is given annually to young researchers to help them pursue an innovative project idea. As part of the “CILCat” project, Prof. Oschatz wishes to use the funding to revolutionise the process of catalysis, which originated in Jena.

“This is a great honour for my group and for me,” says Prof. Martin Oschatz about the grant. He wants to use the third-party funding of some 1.5 million euros in particular to recruit two postdocs and four doctoral students.

“In Mr Oschatz we have gained a scientist who is very active in research and teaching,” says Prof. Georg Pohnert, Vice-President for Research at the University of Jena. “The awarding of the ERC Starting Grant confirms this at the highest European level. We are already looking forward to the implementation of the first-class research ideas by the Oschatz team,” he adds, expressing his appreciation for 34-year-old Oschatz, who has been doing research in Jena since the last winter semester.

Developing concepts for the catalysis of the future

In his innovative project, Oschatz aims to develop promising concepts for catalysis, “and in doing so, I also want to make unconventional, completely new ideas a reality. In order to meet new challenges in the areas of energy and the environment, we first need new physicochemical approaches,” says Martin Oschatz. And Jena is exactly the right place for the young chemist to do this work. It was here that Johann Wolfgang Döbereiner laid the foundations for what we now call catalysis as early as 200 years ago. The production of almost all basic chemicals and the products derived from them is based on the principle of catalysis. The development of new forms of catalysis and catalysts has repeatedly led to major changes in technical-chemical processes and, in many cases, made the manufacture of a specific product possible in the first place. The principle of what is called heterogeneous catalysis is based on the fact that small particles such as molecules or ions bind to the surfaces of solid substances. The particles are “activated” by this interaction, which means that their conversion into other substances is accelerated, as is known, for example, from the catalytic converter in a car, which chemically converts the exhaust gases into harmless substances.

Catalysis without rare or toxic metals

“However, rare metals are often needed for catalytic processes. Furthermore, the particles can only bind to very specific centres on the surface. And in addition, the surfaces of the metals are limited,” says Martin Oschatz, explaining some challenges that he wants to tackle in his research project. Together with his team, he wants to develop the concept of individual catalytically active centres further to an overall catalytically active surface, and to do so entirely without rare, expensive or toxic metals.

“We want to achieve this by creating quasi ‘artificial bonding states’ of molecules between the surfaces of sustainable porous carbon materials and liquids consisting of ions that are present on them,” says Oschatz, describing CILCat’s idea. “To carry this out, we will work on activating nitrogen, which is a very inert molecule. The product will then be ammonia, obtained with the help of water and electricity from renewable energy sources. The ammonia can be further processed into fertiliser or basic chemicals that can be used, for example, to produce medicines,” says Oschatz, describing the goal of the project and the associated hopes of making chemistry and its processes more sustainable and less harmful.

Background: Water splitting and ammonia synthesis in the reactor

For around 100 years, ammonia has been synthesised at high pressure, using the Haber-Bosch process. In this process, hydrogen, which is split by heating natural gas, is combined with nitrogen. High temperatures are required for both processes. In his research, Martin Oschatz is developing materials for catalysts, which enable these processes to take place electrochemically at room temperature. In this way, the energy input can be achieved with electric current and modified such that water can be used as the starting material instead of hydrogen. It will then be possible to combine water splitting and ammonia synthesis in a reactor, which will substantially reduce costs. A century after its creation, ammonia synthesis would then take a significant step forward.