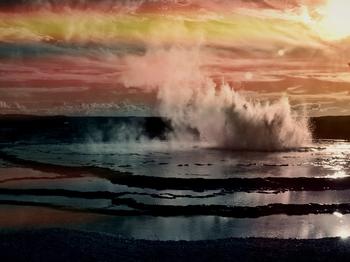 Chemical evolution took place on the early Earth before the biological one: Out of simple abiotic molecules, there emerged increasingly complex networks of chemical reactions and ultimately the first building blocks of life. Analogously to its biological counterpart, chemical evolution is based on the variation and selection of molecules, causing new functions to arise and spread. Although it is a major precondition for the emergence of life, it has been poorly understood heretofore at the molecular level of small organic molecules. A team led by LMU chemist Oliver Trapp has now found promising candidates for a prebiotic evolutionary system with the so-called imidazolidine-4-thione organocatalysts. As the researchers report in the journal Angewandte Chemie, these organocatalysts can dynamically change their composition and catalyze important steps on the path to life.

“When we investigated the formation of amino acids and byproducts under prebiotic conditions, we discovered that imidazolidine-4-thione organocatalysts also arise in considerable quantities,” explains Trapp. These catalysts form a group of cyclic compounds that are made up of various components and are able to continuously transform by means of reversible processes. Catalysts activate or facilitate reactions. Imidazolidine-4-thione organocatalysts are photochemically active and could have played an important role in the early days of our planet, as they catalyze essential reactions such as phosphorylation and are capable of synthesizing amino acid precursors.

“With our experiments, we were able to demonstrate that these catalysts actually can go through an evolution at molecular level,” says Trapp. “Surprisingly, they can change the building blocks out of which they are made. Furthermore, they can incorporate and expel these modified building blocks and thus go through a genuine mutation.” The catalysts adapt to their environment; that is, under different conditions, various species with different catalytic characteristics are formed. This immediately opens up the possibility of multiple reaction paths for the transformation of abiotic material into functional biomolecules. As such, in the view of the authors, these organocatalysts could in fact have played an important role on the early Earth by supporting and catalyzing the development to our current biosystem.