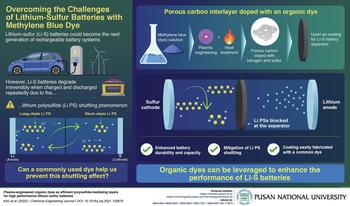 A coating material based on methylene blue dye could ensure high performance of these batteries, says new study

Lithium-sulfur (Li-S) batteries are regarded as the potentially best option for next-generation rechargeable batteries, due not only to their much higher energy density than LIBs but also to relatively lower costs, thanks to their use of sulfur, a widely abundant material. However, Li-S batteries suffer from a few key issues that need to be solved before they can become commercially viable, with the most prominent one being the “polysulfide shuttling effect.” This phenomenon causes long chains of sulfur to leak from the cathode over time, permanently degrading the capacity of the battery with each charge–discharge cycle.

Fortunately, in a recent study, a team of scientists from Pusan National University, South Korea, found an efficient way to mitigate the shuttling effect and improve the performance of Li-S batteries. This paper was made available online on September 29, 2021 and will be published in Volume 430 of Chemical Engineering Journal on February 15, 2022.

Led by Professor Seung Geol Lee, Assistant Professor Jin Hong Lee, and Associate Professor Oi Lun Li, the team developed an innovative approach involving the use of a common organic dye called methylene blue as a precursor for a novel coating material for the separator of Li-S batteries. The procedure involved dissolving the dye in aniline, a carbon-containing solvent, and subjecting the mixture to plasma engineering followed by heat treatment. This created a porous carbon material doped with both nitrogen and sulfur—two elements already present in methylene blue—that could be applied to the separator between the battery cathode and anode.

Thanks to the high heteroelement (element other than carbon) content (10%) of the doped carbon material obtained through this process, the polysulfide shuttling effect could be greatly mitigated, as the scientists demonstrated in various experiments. This, in turn, allowed them to produce more durable Li-S batteries with better electrochemical performances. “Our findings show that methylene blue, and possibly other dyes, can be useful in next-generation energy storage systems,” remarks Prof. Lee.

Overall, this study could motivate scientists worldwide to look into other potential applications of organic dyes outside textile dyeing. Prof. Lee speculates: “We expect our results to greatly contribute to the manufacturing of not only lithium-sulfur batteries but also various other energy storage systems such as sodium-ion batteries, in which carbon materials can be used.”