A new electrolyte for greener and safer batteries 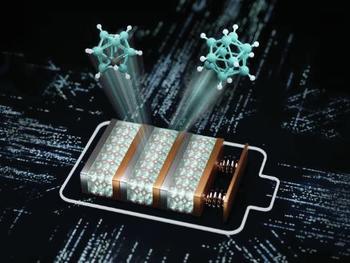 The solid electrolyte developed by the UNIGE team lets the ions move efficiently within the sodium batteries.

The future of battery technologies lies in sodium. More sustainable than lithium - which currently powers most of our devices and vehicles - sodium is also abundant on the earth’s surface. The only problem is that its ions do not move easily in the liquid electrolyte of conventional batteries, making it less efficient than lithium. Therefore, the solution lies in the development of a solid electrolyte. A scientific team from the University of Geneva (UNIGE) has succeeded in meeting this challenge by modifying the crystal structure of a material composed of carbon, boron and hydrogen (carbo hydridoborate). The research group also defined the ideal pressure to be applied to the battery for it to operate efficiently. These results can be read in the journals ACS Applied Materials & Interfaces and Advanced Materials Interfaces.

Introduced to the market in the early 1990s, lithium-ion batteries (or ‘li-ion’ batteries) now power most of our electronic devices and electric vehicles. However, they have two major shortcomings. The liquid electrolyte they contain, which allows positive ions to flow between the two electrodes of the battery, is highly flammable. If it leaks, it can react violently with oxygen, posing a major hazard to users. The supply of lithium is also problematic: unevenly distributed around the globe, it is at the heart of major geopolitical issues in the same way as oil.

An alternative is sodium battery. This chemical element is abundant all over the earth and in the sea and is cheaper than lithium. It is also easier to recycle. However, its use is still underdeveloped. “The production of this type of batteries involves a different technology from that used for lithium-based ones. Industry is still reluctant to embark on this less familiar technology,” explains Fabrizio Murgia, a researcher in the crystallography laboratory of the UNIGE Faculty of Science.

The most efficient material today

Because sodium is heavier than lithium, its ions also move less easily in the liquid electrolyte. The solution is to design a solid electrolyte that is also non-flammable. However, the electrolytes of this type developed up to now, which are composed of hydridoborates (boron and hydrogen), have not been able to achieve the performance of lithium batteries. Two recent studies conducted by the UNIGE crystallography laboratory, headed by Professor Radovan Cerny, have succeeded in solving this problem.

The first one, published in ACS Applied Materials & Interfaces, led to the development of an efficient material: sodium carbo-hydridoborate (NaCB11H12). “Originally, this material which is used in nuclear medicine is not conductive,” explains Radovan Cerny. “By modifying the structure of its crystals, and more precisely the spatial arrangement of the atoms, we have succeeded in making it conductive, which makes it the most efficient means of transporting sodium ions currently available.” To achieve this result, the research team subjected the compound to high shocks, generating high temperatures, inside a ball mill. This is an energy-efficient method that is widely used in the cement industry.

The second research project, published in Advanced Materials Interfaces, consisted of putting this material in situation. For a battery to work, the electrolyte, whether liquid or solid, must be in intimate contact with the positive and negative electrodes of the battery. It must therefore be contained firmly within the battery. “To achieve that, pressure must be applied by means of screws or springs. We looked for the ideal ‘force’ to exert on our solid electrolyte,” explains Matteo Brighi, former postdoctoral scholar in the crystallography laboratory. It was shown that this should be around 400 atmospheres, equivalent to the pressure under water at a depth of 4 000 meters, which can be achieved very easily with a few turns of a screw.

Those discoveries pave the way for easier production of sodium batteries, especially in the automotive industry. “Because of the slightly heavier weight of these batteries, they could be used primarily to power cars. The cost-effectiveness of manufacturing them has also yet to be assessed but it is now important that industry realize that the material we have discovered is really interesting,” concludes Fabrizio Murgia.