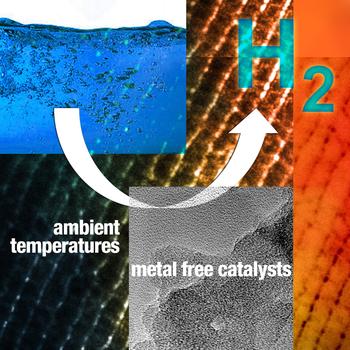 A nitrogen assembly catalyzes the cleavage of carbon-hydrogen (C‒H) bonds in LOHCs and facilitates the desorption of hydrogen molecules.

A new catalyst from the U.S. Department of Energy’s Ames Laboratory and collaborators extracts hydrogen from hydrogen storage materials easily and efficiently. The process occurs at mild temperatures and under normal atmospheric conditions, without using metals or additives. The breakthrough offers a promising new solution that addresses a long-standing challenge to adopting hydrogen fuel for transportation and other applications.

Hydrogen fuel is one potential solution in the nationwide effort to decrease reliance on fossil fuels. According to the DOE, improving hydrogen storage is key to advancing hydrogen fuel cell technologies. At Ames Laboratory, scientists Long Qi and Wenyu Huang research the extraction of hydrogen from a class of materials called liquid organic hydrogen carriers, or LOHCs.

One of the ways to store hydrogen is chemically. Chemical storage relies on materials that react with hydrogen molecules and store them as hydrogen atoms, such as in LOHCs. This type of storage allows large amounts of hydrogen to be stored in small volumes at ambient temperatures. However, for the hydrogen to be useful, catalysts are needed to activate LOHCs and release the hydrogen. This process is called dehydrogenation.

Qi explained that currently there are other dehydrogenation methods, but they raise some challenges. Some methods rely on metal-based catalysts, which involve critical platinum group metals. Supplies of these metals are limited and expensive. Other methods require additives to release the hydrogen. The additives are not reusable and result in a higher overall cost because they need to be added in each cycle.

The catalyst Qi and Huang developed does not require metals or additives. “It’s fairly simple,” Qi said. “Basically, just add the metal-free catalyst into the LOHC, and then the hydrogen gas is just popping out, even at room temperature.”

The catalyst is composed of nitrogen and carbon. The key to its efficiency is the structure of the nitrogen. Catalytic activity can take place at room temperature because of the unique closely spaced graphitic nitrogens as nitrogen assembly which were formed during the carbonization process. The nitrogen assembly catalyzes the cleavage of carbon-hydrogen (C‒H) bonds in LOHCs and facilitates the desorption of hydrogen molecules. This process is what makes the catalyst more efficient than other catalysts in use.

Qi and Huang explained that based on DOE goals for vehicle technologies, the hydrogen storage capacity needs to be close to 6.5% by weight. They are optimistic about the future of their research to meet the goal with molecules that have a larger capacity.

“This research will positively impact the target of reducing carbon dioxide emission,” Huang said, “and we will need to develop more efficient catalytic systems.”

In 2019, the transportation industry accounted for 29% of the overall carbon dioxide emissions in the U.S. Qi said that the ease and efficiency of this process could benefit the transportation industry in the future. The benefits come from a combination of using LOHCs and a catalyst like this one. The combination can extract usable hydrogen from storage at a lower cost and under milder conditions than current technologies. A greater hydrogen density can provide a greater charge for hydrogen fuel cells which could provide power to vehicles over greater distances.

Both Qi and Huang emphasized that this research is an important step to support the national mission to become carbon-neutral by 2050 by providing an easy and efficient way to dehydrogenate LOHCs.