Special show brings the digital transformation in the lab to life 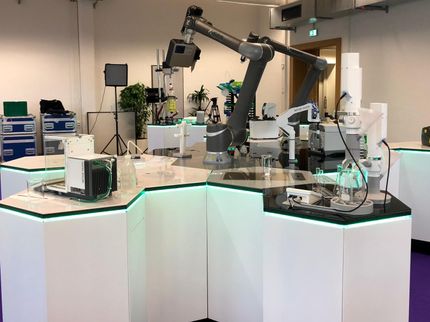 Smart solutions for the digital transformation of the laboratory are the main topic of analytica, the leading trade fair for analysis, laboratory technology and biotechnology, which will open its doors from June 21 to 24, 2022 on the Messe München exhibition grounds. Electronic lab journals, automated high-throughput screenings and pipetting robots: The digital transformation of the laboratory started long ago. “In the laboratory sector, there is a clear desire for more digital support and automation,” says Armin Wittmann, analytica Exhibition Director at Messe München. “analytica brings future technologies to life in order to accelerate the transition to Laboratory 4.0.”

According to a study by the Fraunhofer IPA (Institute for Manufacturing Engineering and Automation), which investigated the degree of digitalization in life science labs, what’s currently slowing down the digitalization of labs is mainly a lack of acceptance and readiness to change as well as ignorance of the possibilities offered by new technologies. The analytica special show on digital transformation aims to dismantle these barriers by winning visitors over to collaborative robots and other technologies live.

The set-up of the analytica special show is a highlight in itself. It is based on the honeycomb-shaped lab system iHEX, devised by a team led by Felix Lenk, CEO of SmartLab Solutions GmbH and head of the SmartLab systems research group at the Dresden University of Technology. The innovative six-sided modules are capable of various functions, can be flexibly arranged and are connected into one complete system electronically and via data connections using a plug-and-play concept.

An essential component of the analytica special show’s smart lab is collaborative robotic arms. They support the lab staff with simple tasks such as inserting caps into a centrifuge or sealing the test tubes. “The goal is to carry out more experiments and analyses with fewer resources and at a higher quality in future,” explains Felix Lenk, who realized the lab for the special show together with several analytica exhibitors. Among others, Mettler Toledo is involved with measuring and precision instruments, Düperthal with safety cabinets and storage systems, and 2mag with stirring and heating technology and INTEGRA Biosciences.

Walking through the trade fair halls, analytica visitors will probably also bump into Kevin, a mobile lab robot developed by the researchers at Fraunhofer IPA. Equipped with a robotic arm, camera, image processing and a learning algorithm, Kevin is capable of transporting samples from one device to the next or taking reagents out of their storage. “Kevin wants to help out lab staff, not replace them,” says Matthias Freundel, Head of the Digital Lab Services group at Fraunhofer IPA. “It’s about relieving the highly qualified lab staff of simple tasks so that they have more time for value-adding activities.“

Another challenge in Laboratory 4.0 is that all devices need to be able to communicate with each other and exchange data. They also need to be connected to the users’ mobile end devices, and sometimes with external IT positions as well. This vision can only be realized if all the software and lab technology can be networked and all the devices have a standardized interface.

The OPC UA (Open Platform Communications Unified Architecture) standard established in industrial automation is suitable as a basis for networking in laboratories, as the sector association SPECTARIS will explain in the analytica Digital Transformation Forum. A SPECTARIS working group is currently developing the Laboratory Agnostic Device Standard, LADS for short, which supplements the OPC UA and makes it fit for the lab setting. The Digital Transformation special show will demonstrate how standardized device communication with OPC UA LADS enables seamless order processing in routine laboratories.

Many activities in laboratories cannot be automated further as they are too complex or require variable action. But digital support could still be helpful here. That’s why the Digital Transformation Forum at analytica 2022 also focuses on technologies that have so far hardly found their way into the laboratory setting, such as voice control for devices and instruments for virtual or augmented reality. Augmented reality glasses, for example, could give laboratory workers instructions on work processes, while automatically recording the steps taken or displaying warnings if sample tubes are filled incorrectly.

Whether in research or routine laboratories, digital change opens up previously unimaginable possibilities. At the same time, it presents the laboratory sector with an enormous challenge that can only be mastered in close cooperation between device manufacturers and software developers, researchers and laboratory operators. analytica, with its combination of trade fair, analytica conference and extensive supporting program, is a platform that brings all these players together. This year, Messe München is offering visitors to analytica a special bonus: With their ticket, they will receive free access to automatica, the leading trade fair for intelligent automation and robotics in production, which is taking place at the same time.