“This discovery was literally a case of serendipity” 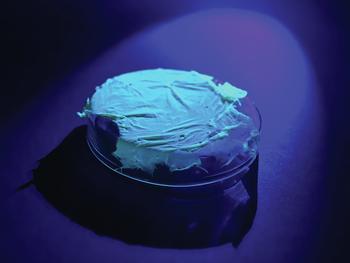 Chemists at the University of Jena, Germany have set a new record, having discovered a fluorescent aluminium complex with the highest quantum yield known to date. For virtually every photon absorbed by the substance, a photon is emitted. This could be of benefit in applications such as LED technology.

“This discovery was literally a case of serendipity,” explains Robert Kretschmer, Junior Professor for Inorganic Chemistry of Catalysis at Friedrich Schiller University Jena.

“We actually wanted to use the substance for catalysis. But my team quickly noticed that the substance features an extremely strong fluorescence. So, we looked into it and demonstrated this unique property.”

If light is absorbed, light is emitted

In fluorescence, a substance emits light when another light hits it and is absorbed. This phenomenon is used, for example, in fluorescent tubes, where the white coating is made to glow by means of invisible UV radiation. But in light-emitting diodes (LEDs), too, the light emitted is the result of fluorescence. However, when energy is transferred, a portion of it is lost and also in fluorescence.

“The record so far for aluminium complexes is around 70 per cent,” says Kretschmer. “This means that with this quantum yield, for every 10 light particles absorbed, seven new ones are emitted by the substance. In our complex, however, almost every light particle is converted into a new one.”

Low-cost aluminium as chemical base

A further advantage is that this record-breaking complex is based on aluminium – a relatively low-cost raw material. “In our substance, two aluminium ions are bound to an organic molecule called ligand,” explains Kretschmer. “Its production is quite simple and can be done in larger quantities in the laboratory, that is to say in grams. We were also able to have the substance spun into a fabric, which then still fluoresces with an impressive 90 per cent quantum yield.”

Kretschmer and his team now want to study the complex in more detail and gain a better understanding of the record-breaking fluorescence.

“We’ll replace the aluminium ions with other metals and also vary the organic ligands,” says Kretschmer. Another goal is to make the complex more stable. For example, it cannot be used in water so far, but that would be important for biological applications. “We already have ideas on how we can achieve that.”