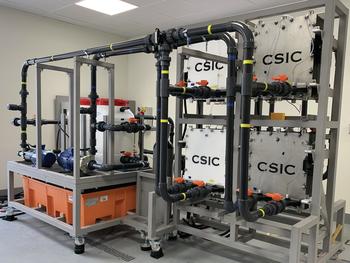 A team of CSIC researchers has developed a 10 kilowatt (kW) vanadium redox flow battery prototype to demonstrate its viability as a large-scale electrical energy storage system, especially for renewable energies. This 10 kW prototype (10 kW of power and 20 kWh of energy) makes it possible to store electrical energy for stationary applications, such as energy storage in homes or small businesses.

This technology is the first milestone on the road to obtaining a 50 kilowatt battery, which will enable the use of this technology to be extended to the industrial sector. The prototype was presented today at an event held at the Institute of Carbochemistry (ICB-CSIC), in Zaragoza, and was attended by the president of the CSIC, Rosa Menéndez, among other authorities. The event, which was open to the public and companies, could be followed on Youtube.

This prototype is the result of the work of the Interdisciplinary Thematic Platform PTI TrasnEner+, of the CSIC, and represents a technological bet for the stationary storage of electrical energy on a large scale, with the aim of achieving greater integration of renewable energies, overcoming their intermittency problems and accelerating the energy transition. The project is coordinated by Ricardo Santamaría, researcher at the Institute of Carbon Science and Technology (INCAR), and involves the participation of groups from eight CSIC centers: INCAR, LIFTEC (integrated in the ICB), ITQ, IRI, ICB, ICMM, ICMAB and ICTP.

Redox flow batteries are highly flexible devices in which the energy is stored in the electrolytes, which contain the electroactive vanadium species. These electrolytes are located in external tanks and flow thanks to the action of hydraulic pumps inside the battery cells where the oxidation-reduction electrochemical reactions take place.

Their main advantage is the versatility they offer: the power and energy of the system can be independently configured by increasing the active surface of the electrodes, the number of cells and the volume of electrolyte. They also have a long life cycle that can exceed 20 years, making them excellent candidates for stationary and heavy-duty applications where other technologies such as lithium batteries cannot compete, facilitating the penetration of renewable energies in the market.

"One of the great advantages of redox flow batteries is that they can be sized in power and capacity to serve storage applications both upstream and downstream of the meter; that is, they can be connected directly to generation plants connected to distribution grids or installed at or near energy consumption centers," says Santamaría.

A project developed in a multidisciplinary collaborative environment

This 10 kW module is the first milestone in the project to achieve a 50 kW battery. The prototype is made up of 4 stacks (stacks of cells) similar to those that will be incorporated in the 50 kW battery. The various components of the battery have been developed by different CSIC teams. The design of all the elements that make up the battery, the technology of the sealing and closure systems, and the manufacturing and assembly processes are the work of the LIFTEC research group led by researcher Félix Barreras. The carbon felts used as electrodes have been modified by the INCAR research group to improve their electrochemical properties, while the ITQ group, led by Antonio Chica, has been in charge of the membranes and the electrolyte.

The module also incorporates a self-developed battery and energy management system, based on operating protocols compatible with industrial standards, with which the battery status can be known at all times.

Likewise, the research group of the Institute of Robotics and Industrial Informatics (IRI), led by Ramón Costa, is collaborating with the LIFTEC group in the design of a telemetry system that allows the battery to be operated remotely and all the operating variables to be visualized in real time. They are also working on the implementation of techniques for the prediction of the state of charge and health that allow efficient management of energy flows and the extension of the useful life of the device.

Technology with a wide range of applications

The 10 kW prototype could cover the growing needs for residential self-consumption of energy in isolated dwellings as well as in small neighborhood communities, or even for small commercial consumers.

However, the final objective of the project is to validate the 50 kW prototype by connecting it to a renewable energy generation plant, such as a solar field. To this end, a smart microgrid has been developed at LIFTEC, consisting of the 10 kW flow battery, a solar field and several programmable loads and sources that allow different consumptions to be simulated.

As indicated by Félix Barreras, "this installation will allow us to study realistic cases according to market needs, with a modular power architecture that allows the battery to be used in stand-alone mode or connected to the grid, either in alternating or direct current".