Possible applications of the new process technology are micro-optical components of sensors, microscopes or lab-on-a-chip systems 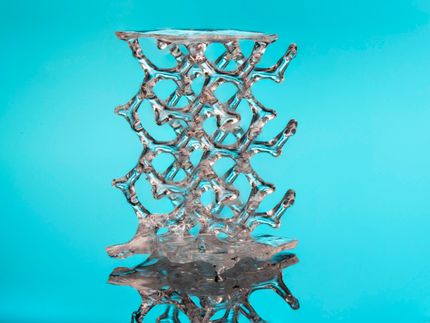 Photograph of a tetrakaidecahedron lattice structure.

Because of its outstanding transparency as well as its stability in contact with heat or chemicals, glass is relevant for many high-tech applications. However, conventional processes for shaping glass are often tedious, energy-intensive and quickly reach their limits for small and complicated components. The Freiburg materials scientists Dr. Frederik Kotz-Helmer and Prof. Dr. Bastian E. Rapp, in cooperation with the University of California at Berkeley in the US, have developed a novel process that can be used to produce very small components from transparent glass quickly and precisely using micro 3D printing. Possible applications include components for sensors and microscopes, but also for lab-on-a-chip systems. The researchers were able to publish their results in the current issue of the journal Science.

The new technology is based on so-called Glassomer materials, which Kotz-Helmer and Rapp developed at the Department of Microsystems Engineering (IMTEK) at the University of Freiburg. “Glassomer materials consist of glass powder in a special plastic binder,” says Kotz-Helmer, “allowing to process glass like a plastic.” The resulting components are then placed in a furnace, which causes the plastic to burn and the glass to be sintered, i.e. densified. “In the end, the components consist of one hundred percent highly transparent fused silica glass,” says Kotz-Helmer.

Component is created in a single step

The Freiburg scientists have now combined Glassomer materials with a new 3D printing process developed by a research team led by Prof. Dr. Hayden Taylor from the University of California, Berkeley. Conventional 3D printers print their objects layer by layer. However, in the new process, called Computed Axial Lithography (CAL), the component is created in a single step. A vessel containing liquid, light-sensitive material is exposed to two-dimensional light images of the object to be printed from many different angles. Where the images overlap and the amount of light absorbed thus locally exceeds a certain threshold, the material hardens abruptly - within a few minutes, the component is formed. The excess, still liquid material can be washed off.

Structures with the thickness of a single hair

“In principle, this process also works with Glassomer material,” says Kotz-Helmer. For this purpose, the Freiburg scientists developed a material made of glass powder and plastic that is both highly transparent and hardens quickly at a suitable threshold value. “The devil was in the chemical details here,” says the materials scientist. Previously, moreover, the CAL process had only been suitable for relatively coarse structures. By combining the materials science expertise at the University of Freiburg and the project partner Glassomer GmbH, a Freiburg spin-off, as well as the further development of the system technology at the University of California, it has now been possible to combine and improve these technologies. “For the first time, we were able to print glass with structures in the range of 50 micrometers in just a few minutes, which corresponds roughly to the thickness of a hair,” says Kotz-Helmer. “In addition, the surfaces of the components are smoother than with conventional 3D printing processes.”

Glass as a substitute for vulnerable plastic

Kotz-Helmer sees possible applications for the innovative manufacturing process, for example, in micro-optical components of sensors, virtual reality headsets and modern microscopes: "The ability to manufacture such components at high speed and with great geometric freedom will enable new functions and more cost-effective products in the future."

Microfluidic channels are also needed for so-called lab-on-a-chip systems for research and medical diagnostics. Until now, these have mostly been made of plastics, but they often cannot withstand high temperatures and aggressive chemicals. Thanks to the new process technology, complex channel systems can now be manufactured in glass, says Kotz-Helmer: "Thanks to the thermal and chemical stability of glass, many new fields of application are opening up, especially in the area of chemistry on-a-chip synthesis."