KNAUER celebrates 60 years of science with new technology, a science award and more 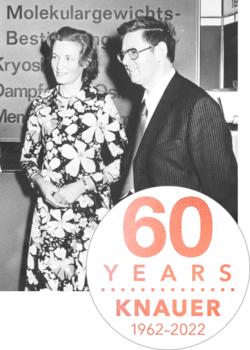 Founders Roswitha and Dr. Herbert Knauer in the 1960ies at a trade show

The Berlin-based manufacturer of high-tech laboratory instruments, KNAUER Wissenschaftliche Geräte GmbH, is celebrating its 60th anniversary this year and has some special promotions to celebrate throughout the year.

60 years – it’s not so extraordinary for a person to reach this age but for a company it is a milestone. The average lifetime of a business in Germany is approximately just 9 years1. To recognize this achievement KNAUER is going to celebrate throughout the year with a series of events and activities.

The winner of the “Herbert Knauer Science Award” will be awarded with 20,000 euros to spend on KNAUER systems for their research group as well as an invitation to KNAUER’s 60th anniversary celebration in Berlin, including travel and hotel accomodation with dinner and breakfast. Applications are open to researchers based in Germany who are contributing towards advancing the field of liquid chromatography. KNAUER is working with renowned scientists to promote the award and to choose the best submission. Among others, the well-known HPLC expert and book author, Dr. Stravos Kromidas, will be a member of the Jury. The application period runs up to and including May 29th 2022 and the winner will be announced in June. The award will be presented at KNAUER’s 60th anniversary gala, which will be celebrated in the company garden in Berlin in early July.

"I am very much looking forward to our big anniversary celebration and the presentation of the "Herbert Knauer Science Award". The KNAUER team, high-ranking guests from science and industry as well as customers and companions of our company will all be in attendance," shared Alexandra Knauer, CEO and daughter of the founding couple.

As a thank you to its customers, KNAUER will also be offering special products in 2022. For example, an anniversary edition of their freezing point osmometer will be released in the second quarter. KNAUER made an international name for itself with osmometers in the 1960s and 1970s. These devices, which are used for the quality analysis of products such as eye drops or isotonic drinks are still under consistent demand.

KNAUER also has two new product launches planned for 2022. One of these is a liquid handling module to complement their current chromatography systems. The liquid handler enables automation of time-consuming steps, allowing researchers to focus on more important tasks, and greater application flexibility.

The other innovation to be released is a research system for the production of lipid nanoparticles. This system, called the "IJM NanoScaler," can be used to optimize LNP production, an essential step in the development of novel mRNA therapeutics. The system produces LNP-encapsulated mRNA in quantities sufficient for clinical trials. KNAUER has been active in the field of lipid nanoparticle production equipment since 2020, when a major pharmaceutical company approached them to work together to create a system to help with their mRNA vaccine production. Since then, KNAUER has expanded its so-called "impingement jets mixing" units into a product line with the new research system, the NanoScaler, being the smallest of these.

The two leading laboratory trade shows, Analytica in Munich in June and ACHEMA in Frankfurt in August, will be used to introduce these new systems, and the team is very much looking forward to meeting any interested parties there, according to KNAUER’s sales manager and managing director Carsten Losch.

KNAUER has been developing and producing laboratory instruments in Berlin since October 1, 1962. When chemist Dr. Herbert Knauer - at that time still a research assistant at the Technical University of Berlin - founded the company with his wife Roswitha Knauer. His first product was a highly accurate temperature measuring instrument that could measure temperature to within a thousandth of a degree, designed in the kitchen of his own home. At the time, this was a sensation. However, it was not until their osmometry devices, which were later developed from this product and can be used to determine concentrations and molecular masses, that commercial success was achieved.

Today, the product focus is on systems and components for liquid chromatography and high-pressure dosing applications. Customized engineering services are also an important mainstay - the latest very successful product being KNAUER’s IJM NanoProducers - the systems used for the production of lipid nanoparticles for coronavirus vaccines.

Alexandra Knauer, the owner of the business who runs it together with joint-CEO, Carsten Losch, is a champion for sustainable development, concerned with both how the business operates and also responsibility for its 160 employees and wider society. The company's founding couple, Roswitha and Herbert Knauer, are still a present force at KNAUER and continue to be committed to its success.