High-tech Metals Germanium and Gallium from the Deep Sea?

Research on the Raw Materials Dilemma 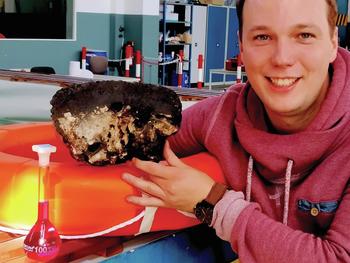 Germanium and gallium are two metals that are of great importance for modern high technologies. Both are important raw materials for the semiconductor industry, for fiber optic cables and for photovoltaics. They are thus essential components for shaping electromobility and the energy transition. Using new analytical methods, the research group "CritMET: Critical Metals for Enabling Technologies" led by Michael Bau, Professor of Geochemistry at Jacobs University in Bremen has studied the distribution of germanium and gallium in iron-manganese crusts from the deep sea. The results have now been published in two journals.

In 2020, 66 percent of global germanium production came from China; for gallium, Chinese market dominance is even greater at 97 percent. Because of this dependence and the associated risks to raw material supplies, both the U.S. government and the European Union have included these metals in their lists of critical raw materials. A great deal of effort is being put into searching for deposits around the world, especially since demand for these metals is expected to increase dramatically in the coming years. But the search for raw materials is proving difficult, and unconventional deposits are also coming into the spotlight.

One way to secure the global supply of critical raw materials could be deep-sea mining. Although it is controversial because of its unclear effects on the environment, it could supply large amounts of the many metals without which, for example, climate policy goals such as the energy transition cannot be realized. Recycling is not yet a solution for critical raw materials in the foreseeable future, as these metals have not yet been used in large quantities.

The research group CritMET: Critical Metals for Enabling Technologies, which is part of the Earth and Environmental Science and Technology study program at Jacobs University, investigates both potential raw material sources and the environmental behavior of critical raw materials such as the rare earths, germanium, and gallium. The articles now published summarize the research results of the group around Katharina Schier and David Ernst, Professors Michael Bau and Dieter Garbe-Schönberg, and national and international cooperation partners.

The iron-manganese crusts studied form very slowly on the seafloor of the deep sea. In the process, they trap and accumulate a variety of metals dissolved in seawater. Using new analytical methods, the working group succeeded in reliably determining the concentrations of gallium and germanium in such crusts. The results are of great importance for basic geochemical research, because they help to better understand the transport of metals from the landmasses to the oceans.

For applied research, however, they are rather disillusioning: The contents of gallium and germanium are too low to make the crusts a source of raw materials for these metals in the foreseeable future. But the results also have a positive side, because the researchers were able to show how effectively gallium and germanium are attached to iron oxides and that they can thus be effectively removed from the water and thus from the environment. As all critical metals are released into the environment, and thus into rivers, lakes and groundwater, in ever-increasing quantities due to their dramatically increasing industrial use, processes to prevent this or to clean up the water are crucial. The use of iron oxides may be a rather simple and inexpensive solution for germanium and gallium.