More than a coffee ring 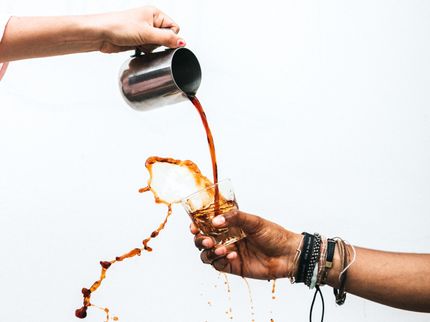 What do coffee, red wine and ink have in common? The stubborn stains they leave behind. Anyone who has ever knocked over a cup of coffee will know that coffee dries in an unusual pattern, the stain is lighter at the center but it gets darker around the perimeter, an effect known as the coffee ring. Prof. Dr. Nicolas Vogel and his team of researchers from the Department of Chemical and Biological Engineering at FAU and their colleagues in Edinburgh are investigating a strategy to tackle the coffee ring effect and produce a consistent drying pattern. Their findings have been published in the journal Nature Communications.

When a droplet of coffee dries, the liquid evaporates faster at the edges than in the center Small, solid particles are present in the coffee when it is brewed. They are drawn to the edge of the droplet by different drying speeds and separate there, forming the characteristic pattern of a coffee ring. This is a universal phenomenon which occurs when liquids containing particles dry, so-called dispersions, for example ink, paint or red wine. Ring patterns are just as undesirable in technical processes as when we spill our coffee. They lead to irregular print images, defects and performance degradation in various coating methods and printing processes.

Researchers have discovered that the trick to achieving consistent drying patterns is modifying the surfaces of the particles with polymer chains so that they efficiently repel each other while being strongly attracted to the surface of the droplet. Spatial repulsion prevents particle accumulation at the edge of the droplet, while particle attachment to the droplet surface results in a homogeneous particle film. When they are combined both effects prevent the formation of a coffee ring.

Importantly, this method not only allows coffee droplets to dry evenly: it can be used with a wide range of commercially available pigment particles and different liquids. As the method is easy to implement and versatile, the new method paves the way to reliable coating processes and inkjet-printed electronic devices in a wide range of advanced technologies, for example, solar cells, transistors or biosensors.