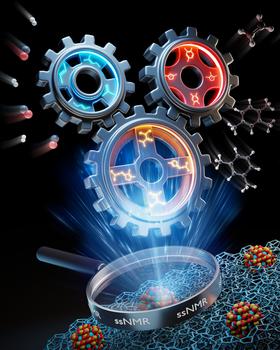 A research team led by Prof. HOU Guangjin and Prof. BAO Xinhe from the Dalian Institute of Chemical Physics (DICP) of the Chinese Academy of Sciences (CAS) has revealed the oxygenate-based routes in syngas conversion over oxide–zeolite (OXZEO) bifunctional catalysts by solid-state Nuclear Magnetic Resonance (NMR).

This study was published in Nature Catalysis on June 23.

OXZEO catalysis was proposed in 2016 by Prof. BAO Xinhe and Prof. PAN Xiulian from DICP. It provides a platform for the efficient utilization of coal and other carbon resources. However, the reaction mechanism in OXZEO catalysis still remains unclear.

In this study, the researchers chose the syngas conversion over the ZnAlOx/H-ZSM-5 bifunctional catalyst as a model system to highlight the mechanistic difference in the OXZEO-based syngas direct conversion. ZnAlOx is a typical metal oxide for syngas to methanol process while H-ZSM-5 is a typical zeolite for methanol to hydrocarbons (MTH) reaction.

Oxygenate-based routes were proved to be contributed to the outlet olefins and aromatics, where the feed, i.e., CO and H2, was also a vigorous participant in these secondary reactions. In addition to the ZnAlOx/H-ZSM-5 catalyst, the researchers also discovered that the key intermediates exist in multiple OXZEO catalysts, proving the universality of oxygenate-based routes in OXZEO-based syngas conversion.

"Our findings provide new insights into the reaction mechanism of syngas conversion on bifunctional catalysts, and may also help to better understand the mechanism of CO2 and biomass conversion," said Prof. HOU.