A mirror tracks a tiny particle 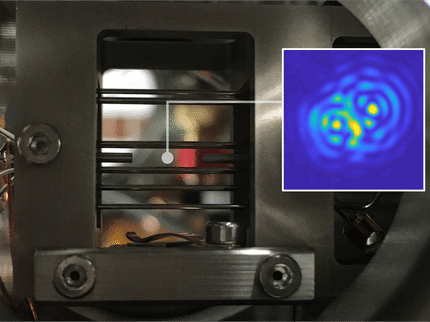 The ion trap used to levitate a single nanoparticle. Inset: optical interference between the particle and its mirror image.

Sensing with levitated nanoparticles has so far been limited by the precision of position measurements. Now, researchers at the University of Innsbruck led by Tracy Northup, have demonstrated a new method for optical interferometry in which light scattered by a particle is reflected by a mirror. This opens up new possibilities for using levitated particles as sensors, in particular, in quantum regimes.

Levitated nanoparticles are promising tools for sensing ultra-weak forces of biological, chemical or mechanical origin and even for testing the foundations of quantum physics. However, such applications require precise position measurement. Researchers at the Department of Experimental Physics of the University of Innsbruck, Austria, have now demonstrated a new technique that boosts the efficiency with which the position of a sub-micron levitated object is detected. “Typically, we measure a nanoparticle’s position with a technique called optical interferometry, in which part of the light emitted by a nanoparticle is compared with the light from a reference laser”, says Lorenzo Dania, a PhD student in Tracy Northup’s research group. “A laser beam, however, has a much different shape than the light pattern emitted by a nanoparticle, known as dipole radiation.” That shape difference currently limits the measurement precision.

The new technique demonstrated by Tracy Northup, a professor at the University of Innsbruck, and her team resolves this limitation by replacing the laser beam with the light of the particle reflected by a mirror. The technique builds on a method to track barium ions that has been developed in recent years by Rainer Blatt, also of the University of Innsbruck, and his team. Last year, researchers from the two teams proposed to extend this method to nanoparticles. Now, using a nanoparticle levitated in an electromagnetic trap, the researchers showed that this method outperformed other state-of-the-art detection techniques. The result opens up new possibilities for using levitated particles as sensors — for example, to measure tiny forces — and for bringing the particles’ motion into realms described by quantum mechanics.