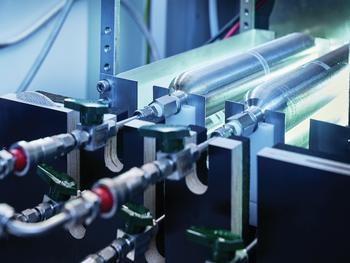 Not only the production of green hydrogen, but also its safe and compact storage is a major challenge for the energy transition. Metal hydrides could be a good solution - they can store large quantities of hydrogen in a small space. However, the mining and production of the up to now required high-purity materials emit large amounts of carbon dioxide. Researchers of the Helmholtz-Zentrum Hereon now demonstrated, that hydrogen storage materials can also be produced from recycled industrial waste. The result: a significantly more climate-friendly production of hydrogen storage materials.

Whether it is cars, energy or mobile phones: modern society is built on metals and our future strongly depends on these materials, too. To store hydrogen in a safe, compact and still environmentally friendly way is still a major challenge. Metal hydrides could be an appealing solution, especially for those applications where the volume and safety of the storage system is an issue – for example, in stationary storages, in hydrogen refueling stations or ships – as they can provide a very high storage density. High-purity metals are commonly used to produce these storage materials. Despite their advantages, the mining and large-scale production of these materials is a heavy burden on the environment as they emit large amounts of greenhouse gases, not to speak of the impact of mining of the raw materials on the landscape itself. Researchers at the Hereon Institute of Hydrogen Technology have now shown that high-quality hydrogen storage materials can also be produced from less pure industrial metal wastes. These findings allow for the first time to use a circular economy strategy to produce metal hydrides. As a result, their production is much more environmentally friendly.

“The utilization of circular economy approaches to the production of hydrogen storage materials allows us to tackle the energy challenges that modern times pose to our society in a more sustainable manner, “says Dr Claudio Pistidda, scientist at the Hereon Institute of Hydrogen Technology.

Millions of tons of metal waste are generated each year. The recycling of these materials is crucial to mitigating the threat that the ever-increasing demand for metal poses to the economic growth of many countries. Although for most of the metal alloys used in industry, successful recycling methodologies are in place, a significant quantity of them are still lost. Producing metal hydrides from otherwise non-recyclable materials could capture large amounts of this industrial waste, as was shown by the Hereon scientists. Metal hydrides seem to be rather insensible to the exact alloy composition in contrast to metallic alloys, e.g. for high performance construction purposes.

Compared to common pressurized or liquid hydrogen tanks, metal hydrides are an appealing solution for storing hydrogen at low pressures and moderate temperatures in a safe and compact way. The metal compounds ground into fine powders have a high affinity for hydrogen. Once they are exposed to it, the high affinity leads to the break of the bonds between the two hydrogen atoms of the hydrogen molecule (H2). After that, the metals bond with the single hydrogen atoms resulting in hydride species. This process can easily be reversed by decreasing the before applied hydrogen pressure to create the metal hydrides or by increasing the temperature. So just like a sponge with water, the metal hydrides can bind hydrogen in astounding quantities and release it again quickly. At the Hereon Institute of Hydrogen Technology, scientists are creating nanostructured materials for hydrogen storage, looking into sustainable large-scale production methods, and evaluating these materials in real-world settings.