Rare earth metals, when linked, can act as a conduit for energy flow, and show promise for the development of novel materials 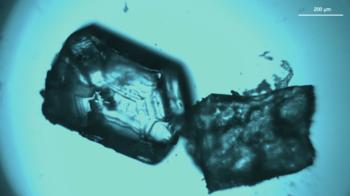 Scientists have connected two soft crystals and observed energy transfer between them—a finding that could lead to the development of sophisticated, responsive materials. The study, by scientists at Hokkaido University in Japan, was published in the journal Nature Communications.

Soft crystals are flexible molecular solids with highly ordered structures. When they are subjected to external stimuli, such as vapour or rubbing, their molecular structures get reordered and they respond by changing shape, colour or luminescence.

“We wanted to know what would happen if we merged soft crystals at the molecular level to connect them,” says Yasuchika Hasegawa, a materials chemist at Hokkaido University and lead author of the study. Hasegawa and his team used rare earth metals called lanthanides, whose ions have similarly large radii and therefore form similar structures. Lanthanide compounds, of which there are 15, are interesting because they can luminesce.

The team studied the structures of crystals made from the lanthanides terbium (Tb), which luminesces green, and dysprosium (Dy), which luminesces yellow. The team first linked the crystals of each lanthanide separately and observed the structures and energy transfer within the compounds. They then used this information to merge Tb(III) and Dy(III) crystals together through a pyridine bond and examined the molecular structure of an energy transfer within the merged ‘molecular train’.

When they excited the dysprosium end of the train using  blue light, they observed green luminescence at the opposite terbium end. Their calculations revealed energy was transferred from one crystal to the other over a distance of 150 micrometres. “This energy migration distance is the longest reported for lanthanide coordination polymers or complex systems,” says Hasegawa. The terbium end continued to luminescence for 0.60 milliseconds.

Connecting soft crystals could lead to the formation of novel crystal structures that could have applications in semiconductors, lasers, optical fibres and printing.