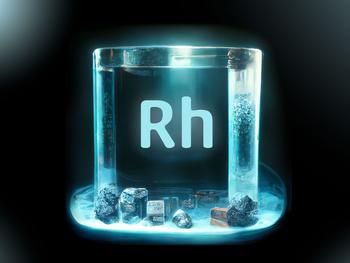 Mayara da Silva Santos, doctoral candidate at the University of Freiburg’s Institute of Physics, has discovered a new oxidation state of rhodium. This chemical element is one of the most catalytically important platinum-group metals and is used, for example, in catalytic converters for automobiles. Rhodium is actually already well studied. What helped Silva Santos make the rare discovery of a surprisingly high oxidation state was a new approach: As part of her doctoral dissertation, she is studying unusual transition metal oxides. Her discovery of so-called rhodium(VII) has just been published as a very important paper in the journal Angewandte Chemie.

Oxides in an ion trap

“Discoveries are always exciting,” says the Freiburg chemist: “Our oxides are highly reactive but could play an important role as reactive intermediate states.” They can be observed in chemical reactions only with difficulty because they are very short-lived. “We were able to store the oxides in a special ion trap at low temperatures over an extended time period and thus study them undisturbed.”

Third-highest oxidation state of all elements

This interdisciplinary approach, combining physics and chemistry as well as experiment and theory, was the key to success, says Prof. Dr. Tobias Lau, professor at the University of Freiburg’s Institute of Physics: “The teamwork between different disciplines was very helpful in sample production, mass spectrometry, X-ray spectroscopy, and data analysis.”

An important finding of this interdisciplinary work is that more valance electrons than previously thought can take part in chemical bonds with rhodium and that rhodium can assume the third-highest oxidation state of all elements. This highest oxidation state of rhodium – rhodium(VII) – was previously unknown but could play a role in chemical reactions.