A polyester plastic of great mechanical stability, which is also easily recyclable and even compostable 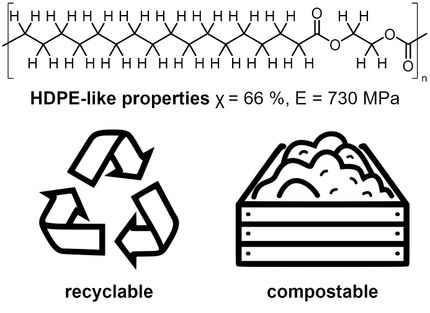 Regarding its properties and structure, the novel polyester resembles high density polyethylene (HDPE), but at the same time, it is recyclable and biodegradable.

How can plastics be designed so they retain their desirable properties but at the same time can be more effectively recycled? This and other questions concerning the eco-friendliness of plastics are the focus of chemist Stefan Mecking and his research group at the University of Konstanz. In their latest paper in the international edition of Angewandte Chemie, the team presents a new polyester which exhibits material properties that are attractive for industry while being environmentally friendly.

Plastics are made of long chains of one or several chemical basic modules, so-called monomers. Plastics distinguished by high crystallinity and water repellency, therefore mechanically highly resilient and stable, are widely used. A well-known example is high density polyethylene (HDPE), whose basic modules consist of non-polar hydrocarbon molecules. What may on the one side be advantageous properties for applications can also have adverse effects: It is very energy intensive and inefficient to recycle such plastics and recover the basic modules. Also, if such plastics leak into the environment, the degradation process is extremely long.

To overcome this supposed incompatibility between the stability and biodegradability of plastics, Mecking and his team insert chemical “breaking points” in their materials. They already showed that this greatly improves the recyclability of polyethylene-like plastics. However, good biodegradability is not automatically guaranteed. “Plastics often gain high resilience because they are ordered in densely packed crystalline structures,” Mecking explains: “Crystallinity in combination with water repellency usually strongly decelerates the biodegradation process, as it impairs the microorganisms‘ access to the breaking points.” However, this does not apply to the researchers’ new plastic.

Crystalline and yet compostable

The new plastic, polyester-2,18, consists of two basic modules: a short diol unit with two carbon atoms and a dicarboxylic acid with 18 carbon atoms. Both modules can be easily obtained from sustainable sources. For example, the starting material for the dicarboxylic acid, which is the plastic’s main component, comes from a renewable source. The polyester’s properties resemble those of HDPE: due to its crystalline structure, for example, it exhibits both mechanical stability and temperature resistance. At the same time, first experiments for recyclability showed that under comparatively mild conditions, this material’s basic modules can be recovered.

The new plastic also has another, quite unexpected property: in spite of its high crystallinity it is biodegradable, as lab experiments with natural enzymes and tests at an industrial composting plant showed. Within a few days, in a lab experiment the polyester was degraded by enzymes. The composting plant’s microorganisms required about two months, so this plastic even meets ISO-composting standards. “We too were amazed by this rapid degradation,” says Mecking, who adds: “Of course we cannot transfer the results of the composting plant one-to-one into any conceivable environmental condition. But they do confirm that this material is indeed biodegradable and indicate that it is much less persistent than plastics like HDPE, if it should unintentionally be released into the environment.”

Both the recyclability of this polyester and its biodegradability under variable environmental conditions are now to be studied further. Mecking sees possible applications for this new material, e.g. in 3D-printing or in the production of packing foils. In addition, there are further areas of interest, in which it is desirable to combine crystallinity with recyclability and the degradation of abraded particles or similar loss of material.