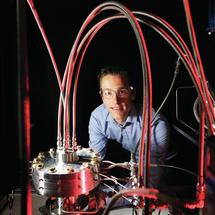 Eindhoven University researcher Marco Meeuwse with one of his test systems for the rotor-stator spinning disc reactor.

One of the test systems of the rotor-stator spinning disc reactor developed by Eindhoven University researcher Marco Meeuwse. 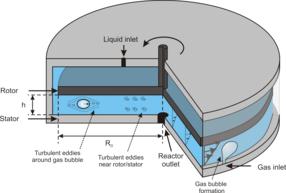 Researcher Marco Meeuwse of Eindhoven University of Technology has developed a unique chemical reactor, the ‘spinning disc reactor’. This is a cylinder containing a rotor that increases the safety and efficiency of chemical production processes involving gases, liquids and solids through its very high mass transfer rate.  This new reactor is particularly beneficial for the pharmaceutical and fine chemical industries.

The idea of the ‘spinning disc reactor’ came from Meeuwse’s co-supervisor dr.ir. John van der Schaaf. Around five years ago he had seen a research project in which a liquid was sprayed onto a rotating disc and driven outwards by centrifugal force.

Assistant professor Van der Schaaf thought that combining the rotating disc with a nearby wall would create high shear stress and rapid turbulence, leading to high efficiency. He asked doctoral candidate Meeuwse to investigate whether this was true. Now, four years later, he can say without hesitation that the newly developed reactor does exactly what was expected of it. “In fact it does even more”, says Meeuwse. “We were sure it would perform better than the conventional reactors, but we didn’t expect it to be so much better.”

Gas is fed into the reactor through the floor of the cylinder, with the rotating disc located just above it. The gas bubbles are effectively sheared off by the high-speed flow of rotating liquid through which they pass. “The higher the rotational speed, the smaller the bubbles and the larger the surface area”, explains Meeuwse. “That translates into a higher rate of reaction and mass transfer. That was confirmed every time by analyses of the images of the gas-liquid flow and the mass transfer measurements.”

Meeuwse was able to scale-up the principle by using a series of rotating discs. Three discs with a diameter of 13 cm were mounted on a shared spindle in a cylinder. “If each unit does the same thing, the total mass transfer of the three discs in series should also be three times as great. Our measurements clearly showed that this reasoning was true, providing the proof that we can scale the system up.” An extra benefit of the reactor is that it is safer, because it is much smaller than conventional reactors. This is a big advantage in processes using hazardous substances.

Further development of the reactor is currently in full swing, and a number of related PhD projects are in progress at TU/e. A major equipment manufacturer has become involved, and several chemical and pharmaceutical companies have also shown interest, Meeuwse explains. “We know that this reactor is better than the conventional types. We have measured improvements by factors ranging from two to ten, but we haven’t yet been able to identify the full potential of the new concept.”

Is there a big market for this new type of reactor? “It is definitely usable for processes in which conversion and selectivity are important factors, such as in the pharmaceutical industry”, says Meeuwse. “The raw materials for medicines are very costly, so the less you need to purify the products afterwards, and the less waste you throw away, the more rewarding it will be to use our reactor. In terms of volume it may not be a big market, but on the other hand the processes concerned have a high added value.”