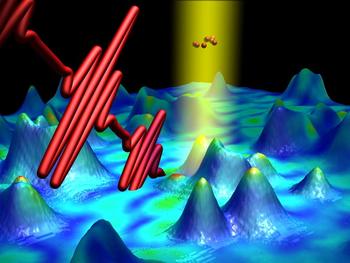 Ultra-short laser pulses (red) are used to measure electron oscillations (red balls) at the surface of a nano-structure.

Researchers from Bielefeld, Kaiserslautern and Würzburg have developed a novel high-tech microscope: It magnifies objects a million times and shows movements with a retardation of one million billion times.

The new technology allows tracking extremely fast processes in miniature objects – with an unparalleled spatial and temporal resolution. "For the first time we were able to determine the duration of electron oscillations in a single nano structure", says Professor Tobias Brixner of the Institute for Physical and Theoretical Chemistry of the University of Würzburg.

The analyses have shown that the collective electron movement after exciting a silver nano structure with light lasts up to 20 times longer in certain places than was thought. The duration of electron oscillations is of interest not only for basic research. It also has a significant influence on the efficiency of energy transport processes as occur, for instance, in photovoltaic cells or during the photosynthesis of plants.

"Our new method will allow us in the future to track very fast processes in many natural and artificial nano-structured materials", the scientists explain.

The research team and its sponsors

The teams of Professor Martin Aeschlimann (Kaiserslautern), Tobias Brixner (Würzburg) and Walter Pfeiffer (Bielefeld) presented their new analysis method on 11 August 2011 in "Science". The German research association (DFG) has supported the project of the three research teams within the scope of its priority program "Ultrafast Nano-Optics".

How did the cooperation partners accomplish this success? They combined the advantages of an electron microscope with the excitation of ultra-short laser flashes and the high time resolution that can be achieved by this. This enables them to detect structures ten times smaller than would be possible using optical microscopes. The progress of the object properties can thus be followed with the extremely high time resolution of a few femtoseconds – an inconceivably short period of time during which a jet plane travels a distance smaller than the diameter of an atom", as Professor Brixner compares.

In order to be able to track ultrafast processes in the microcosm, the researchers use a complex sequence of ultra-short laser pulses which experts refer to as "coherent two-dimensional nanoscopy". The physicists and physical chemists finally accomplished their goal by developing a new sequence of laser pulses and the proof of the electrons emitted in this process.