Concept is based on research at Bielefeld University 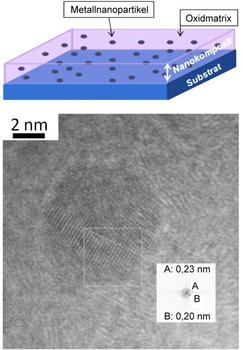 Like raisins in a cake, metal nanoparticles are embedded into the functional metal oxide matrix. The electron microscope image shows a single silver nanoparticle in a surrounding zinc oxide matrix.

Semiconductor thin films with special electronic, magnetic or optical functions are widely demanded for technical applications in increasingly smaller and efficient devices - they are indispensable in high-efficiency solar cells, bright light-emitting diodes and magneto-electronic devices. Especially interesting are nanostructured materials where several crucial functions such as electrical conductivity and optical properties can be precisely controlled. At Bielefeld University, chemists have now developed a modular system for this purpose: Their approach enables flexible design and deposition of nanocomposite thin films of metal oxides with embedded metallic nanoparticles, enabling reliable control of their functionality.

Dr. Naoufal Bahlawane is the leading force behind this research project. Until this March, he was a member of the research unit Physikalische Chemie I at Bielefeld University, headed by Prof. Dr. Katharina Kohse-Höinghaus, from where he moved to the Centre de Recherche Public – Gabriel Lippmann in Luxembourg. Collaborative work remains ongoing between him and the Bielefeld group. "After ten years of research, we have now reached a breakthrough", said Bahlawane. "Our rational approach opens up avenues for a huge number of potential applications – we can now play with the proper-ties of the materials and think of new functions."

The fundamental work developing the catalytically enabled chemical vapour deposition (CVD) strategy was performed by Bahlawane and Kohse-Höinghaus at Bielefeld University. For the results highlighted here, they teamed up with colleagues at the University of Bremen and the Physikalisch-Technische Bundesanstalt (PTB) Braunschweig, permitting unambiguous charac-terization of the deposited nanocomposites with dedicated analysis techniques. In their ap-proach, metal nanoparticles were embedded in a controlled fashion into a thin film of functional oxides to systematically and reliably influence the specific properties of the composite structure in the direction of the desired function.

Variable parameters in this modular system are the chemical composition of the particles, which can be pure metals or alloys, their size and distribution as well as the properties of the surrounding oxide host material. For the first time, the team around Bahlawane and Kohse-Höinghaus was able with their approach to control oxide matrix and metal nanoparticles fully independently to tune their visible absorption. Similarly, the strategy can influence magnetic properties in a controlled way. New possibilities for applications profiting from such nanocomposites can be envisaged including solar cells, sunlight-driven photocatalysis and magnetic-optical and electrical devices.

An extremely valuable feature of the present catalytically driven deposition approach, says Kohse-Höinghaus, should be its principal compatibility with CVD as an established industrial micro-fabrication technique. It may thus be possible to adapt the Bielefeld approach to stan-dard fabrication environments.