A heat engine measuring only a few micrometres works as well as its larger counterpart, although it splutters 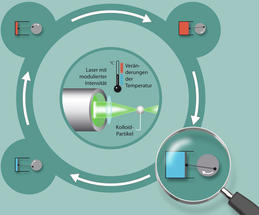 A Stirling engine in the microworld: In a normal-sized engine, a gas expands and contracts at different temperature and thus moves a piston in a cylinder. Physicists in Stuttgart have created this work cycle with a tiny plastic bead that they trapped in the focus of a laser field.

What would be a case for the repair shop for a car engine is completely normal for a micro engine. If it sputters, this is caused by the thermal motions of the smallest particles, which interfere with its running. Researchers at the University of Stuttgart and the Stuttgart-based Max Planck Institute for Intelligent Systems have now observed this with a heat engine on the micrometre scale. They have also determined that the machine does actually perform work, all things considered. Although this cannot be used as yet, the experiment carried out by the researchers in Stuttgart shows that an engine does basically work, even if it is on the microscale. This means that there is nothing, in principle, to prevent the construction of highly efficient, small heat engines.

A technology which works on a large scale can cause unexpected problems on a small one. And these can be of a fundamental nature. This is because different laws prevail in the micro- and the macroworld. Despite the different laws, some physical processes are surprisingly similar on both large and small scales. Clemens Bechinger, Professor at the University of Stuttgart and Fellow of the Max Planck Institute for Intelligent Systems, and his colleague Valentin Blickle have now observed one of these similarities.

“We’ve developed the world’s smallest steam engine, or to be more precise the smallest Stirling engine, and found that the machine really does perform work,” says Clemens Bechinger. “This was not necessarily to be expected, because the machine is so small that its motion is hindered by microscopic processes which are of no consequence in the macroworld.” The disturbances cause the micromachine to run rough and, in a sense, sputter.

The laws of the microworld dictated that the researchers were not able to construct the tiny engine according to the blueprint of a normal-sized one. In the heat engine invented almost 200 years ago by Robert Stirling, a gas-filled cylinder is periodically heated and cooled so that the gas expands and contracts. This makes a piston execute a motion with which it can drive a wheel, for example.

“We successfully decreased the size of the essential parts of a heat engine, such as the working gas and piston, to only a few micrometres and then assembled them to a machine," says Valentin Blickle. The working gas in the Stuttgart-based experiment thus no longer consists of countless molecules, but of only one individual plastic bead measuring a mere three micrometres (one micrometre corresponds to one thousandth of a millimetre) which floats in water. Since the colloid particle is around 10,000 times larger than an atom, researchers can observe its motion directly in a microscope.

The physicists replaced the piston, which moves periodically up and down in a cylinder, by a focused laser beam whose intensity is periodically varied. The optical forces of the laser limit the motion of the plastic particle to a greater and a lesser degree, like the compression and expansion of the gas in the cylinder of a large heat engine. The particle then does work on the optical laser field. In order for the contributions to the work not to cancel each other out during compression and expansion, these must take place at different temperatures.  This is done by heating the system from the outside during the expansion process, just like the boiler of a steam engine. The researchers replaced the coal fire of an old-fashioned steam engine with a further laser beam that heats the water suddenly, but also lets it cool down as soon as it is switched off.

The fact that the Stuttgart machine runs rough is down to the water molecules which surround the plastic bead. The water molecules are in constant motion due to their temperature and continually collide with the microparticle. In these random collisions, the plastic particle constantly exchanges energy with its surroundings on the same order of magnitude as the micromachine converts energy into work. “This effect means that the amount of energy gained varies greatly from cycle to cycle, and even brings the machine to a standstill in the extreme case,” explains Valentin Blickle. Since macroscopic machines convert around 20 orders of magnitude more energy, the tiny collision energies of the smallest particles in them are not important.

The physicists are all the more astonished that the machine converts as much energy per cycle on average despite the varying power, and even runs with the same efficiency as its macroscopic counterpart under full load. “Our experiments provide us with an initial insight into the energy balance of a heat engine operating in microscopic dimensions. Although our machine does not provide any useful work as yet, there are no thermodynamic obstacles, in principle, which prohibit this in small dimensions,” says Clemens Bechinger. This is surely good news for the design of reliable, highly efficient micromachines.