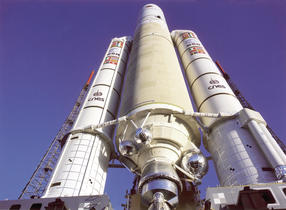 Air Liquide and Astrium announce the creation of EuroCryospace, a strategic partnership at European level. EuroCryospace is the new European expansion of Cryospace, created nearly 25 years ago by both companies, for the development and production of Ariane cryogenic tanks.

EuroCryospace will be focused on the development and production of cryogenic tanks, in particular for the Ariane 5 Midlife Evolution (ME) upper stage.

Ariane 5 ME, a major European Space Agency (ESA) programme, adopted by the Council of Ministers in 2008, is aimed at upgrading the current Ariane 5 launcher in order to meet the market requirements for a higher launch capacity.

Further development phases should be approved at the next ESA Ministerial Council meeting, scheduled for the end of 2012.

This long-term commitment will lead to the opening of a new site in Bremen, Germany, and to the creation of around 40 jobs during the production phase. The land, located near Bremen airport, was purchased in December 2011 for the construction of the building that will house development and production. It should be operational mid-2013 with the first productions delivered in 2014.

Through Cryospace, Air Liquide and Astrium have been working together successfully for 25 years. Air Liquide, historical partner of the European space programme, and Astrium, Europe’s leading space company and prime contractor for the development of Ariane 5 Midlife Evolution (ME), both wish to continue to jointly develop their activity in space technologies through the Ariane programme, taking into account the industry’s new requirements. This long term commitment will enable the development of capabilities that will prove indispensable to the future technology challenges.

The new upper stage tank developments will take place in Germany. Thanks to its significant presence in Germany, the Group’s second European pillar, Air Liquide will be supporting its partner in this new development.