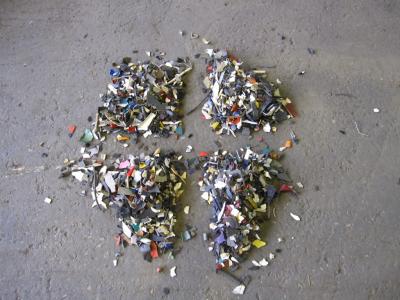 Electrical and electronic appliances are not only made from metallic materials, but also consist of up to more than 20% of plastics in average. These are found, for example, in casings or in base materials for circuit boards. No simple task for recycling companies, which find themselves confronted with a growing amount of electrical and electronic waste, as plastics from scrap electrical and electronic equipment are rather diverse and may contain hazardous substances. Depending on the type of plastic and its application, they contain brominated flame retardants and other additives which may result in increased heavy metal concentrations. If certain legally defined maximum concentration values are exceeded, recycling has to be ruled out unless further action is taken.

Looking for evidence of harmful substances in electrical waste

The three Empa researchers, Patrick Wäger, Mathias Schluep and Esther Müller, with assistance from Bachema AG in Schlieren, Switzerland, studied a total of 53 mixed plastic samples from 15 European countries. The results showed that none of the equipment groups is entirely without problems: Brominated flame retardants or heavy metals were found in all the mixed plastics from disassembled electrical and electronic equipment, though concentration levels varied.

Particularly high concentrations of restricted brominated flame retardants were found in plastic rear panels from cathode ray tube monitors, whereas these substances could almost not be detected in plastic rear panels from flat screen monitors. High concentrations of heavy metals were found in mixed plastics from small domestic appliances (cadmium), information and communications technology (lead) and consumer electronics (lead). The researchers assume that the increased concentrations of lead, in particular, are primarily the result of cross-contamination from mechanical processing (lead from solder). In order to prevent these substances from dissipating into the environment or into components for new products, the researchers recommend that plastics from the processing of electrical and electronic equipment should be subject to strict quality management until such time as they are disposed of or recycled.

Results of the study incorporated into new standard

The results from the study have been incorporated into the new European WEEELABEX (WEEE LABel of EXcellence) standard, which governs the collection, sorting, storage, transport, reuse, treatment and disposal of electrical and electronic equipment. The editors of Environmental Science & Technology – the most cited journal in the environmental engineering and environmental sciences category – expect the paper to have «a significant and long-lasting influence on the field» and award it the title «Best Policy Analysis Paper» of 2011 in the first April issue of the journal.