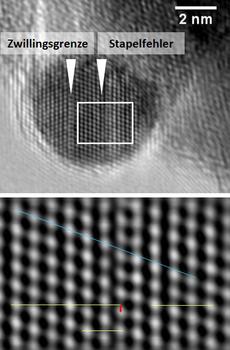 Defect as a recipe for success: The images of the high-resolution transmission electron microscope show the arrangement of the individual atoms in a copper particle. The arrows indicate stacking faults and twin boundaries. In the detailed image, the stacking fault can be recognized by the fact that the atoms (white dots) deviate from the blue line from a certain position. How strongly is indicated by the red arrow on the yellow line in the lower part of the image. The defects in the crystal structure are also noticeable on the surface of the particles and increase the activity of the catalyst.

There is now one less mystery in chemical production plants. For many decades industry has been producing methanol on a large scale from a mixture of carbon dioxide and carbon monoxide, as well as hydrogen. An international team, including chemists from the Fritz Haber Institute of the Max Planck Society in Berlin, has now clarified why the catalyst used in this process - copper and zinc oxide particles and a small portion of aluminium oxide - works so well. They also discovered why this reaction accelerator has to be produced in the tried and tested way. The researchers established that defects in an as yet unknown combination with mixing of copper and zinc oxide at the catalyst’s surface are the reason why the catalysts are so active. These findings could make a contribution to further improving the catalyst, and also help researchers develop catalysts that convert pure carbon dioxide efficiently. These could be used to recycle the greenhouse gas that is produced when fossil fuels burn.

Recycling could provide an elegant way of, for example, solving the problem of the carbon dioxide emission from coal-fired power stations. It is not only the fact that the gas would then no longer heat up the climate; methanol could be used to replace at least part of fossil raw materials, but above all could be used to store regenerative energy. “A changeover to green energies is not possible without energy storage systems,” says Robert Schlögl, Director at the Fritz Haber Institute of the Max Planck Society. This is because the electricity generated by wind turbines and solar installations varies strongly and does not follow demand. The findings of the chemists at the Fritz Haber Institute and their team of researchers could contribute to the development of catalysts that efficiently convert carbon dioxide produced in the combustion of coal, gas or oil with hydrogen into methanol or other chemical energy storage systems.

The Berlin-based Max Planck researchers were joined by scientists from the Helmholtz Zentrum Berlin für Materialien und Energie (HZB), the SLAC National Accelerator Laboratory in Menlo Park, California, Stanford University and Südchemie AG in carrying out the work. The researchers studied the catalyst which industry is already using to produce 50 million tonnes of methanol annually. However, industry uses a mixture of carbon dioxide and carbon monoxide for the process, which is produced especially for this purpose from natural gas or coal. “Only when we understand why this catalyst works so well and why it must be produced in the tried and tested way will we be able to optimise it and further develop it for the conversion of pure carbon dioxide,” says Malte Behrens, who played a crucial role in clarifying the catalyst’s mystery.

Where do the molecules team up?

The industrial catalyst is composed of innumerable nanoparticles, some made of copper, some of zinc oxide and a small proportion of aluminium oxide; together they form a type of nanosponge. Malte Behrens and his colleagues have now identified the sites in the aggregate where carbon dioxide and carbon monoxide molecules combine with their hydrogen partners via various intermediate steps. Using images from a high-resolution transmission electron microscope (HRTEM) and neutron diffraction, which provides information on the crystal structure, the scientists discovered defects in the arrangement of the copper atoms in the nanoparticles. They subsequently employed quantum chemical computations to prove that some of the intermediate products preferred to adsorb at these defects. This means: The defects increase the catalyst’s activity, as its exact task is to promote the formation of these intermediate products.

In addition, the scientists discovered why the zinc oxide plays an important role in the mixture. They investigated the nanosponge with the synchrotron radiation from the Bessy II electron storage ring at the Helmholtz-Zentrum Berlin für Materialien und Energie using equipment which the Max Planck researchers had developed especially for the investigation of catalysts. They used the X-ray portion of this extremely intense radiation to follow what was happening chemically on the surface of the reaction accelerator when it came into contact with the reaction partners. In these analyses, and also on HRTEM images, they ascertained that zinc oxide also creeps over parts of the copper particles, and that some atoms in the copper surface are even replaced by zinc. This also makes the catalyst very active: calculations showed that some intermediate products of the reaction - in this case those containing oxygen - are more likely to bond to the zinc than to the copper.

It had long been assumed that the copper was the only catalytically active component. The catalysis research therefore concentrated on increasing its surface, as more molecules find room for the chemical transformation on the larger surface. For a long time, chemists assumed that the zinc oxide’s only role was as a spacer; it was to prevent the copper particles fusing with each other in the heat of the reaction. The zinc oxide particles also fulfil this role, but it has been known for some years that zinc oxide also exerts another influence. This is because, although similar sponge-like structures from copper and metals other than zinc also have a large surface, they come nowhere near to achieving the activity of the copper-zinc-aluminium system. “Different effects of the zinc oxide were discussed,” says Malte Behrens. “Our investigations are now helping to finally explain its role.”

Search for catalysts no longer trial and error

Since the scientists now know which structural details characterise the tried and tested catalyst for methanol synthesis, they now understand why it is so difficult to prepare the reaction accelerator. The catalyst is produced from solutions of copper and zinc salts in several steps. Chemists first produce a precursor of the catalyst by precipitating both metals as carbonates. “The pH value and the temperature at which the precursor is produced decide on the activity of the catalyst,” says Malte Behrens. “The catalyst has a chemical memory.” Now the chemist can also explain what the catalyst remembers: Only in the tried and tested process does the copper crystallise with small defects, and the zinc creep over and into the copper.

These results are not only relevant because they can assist in improving the methanol synthesis and trim it for the recycling of emissions. “Our work also shows that we will only really understand catalysts when we look at them in all their complexity,” says Robert Schlögl. Researchers have often studied the catalytic process of methanol synthesis, but always on idealised model systems. These are easier to investigate and to describe theoretically. However, it is precisely the decisive details, such as defects, that do not exist in them. Moreover, the findings represent a paradigm change in catalysis research. “Until now, new catalysts have usually been found using the trial and error method,” says Robert Schlögl. “Our work shows that we can understand catalysts and their manufacture in detail. This allows us to develop catalysts in the future in a rational way, namely on the drawing board, as well.”