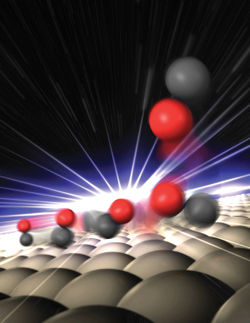 Scientists at the U.S. Department of Energy's (DOE) SLAC National Accelerator Laboratory used LCLS, together with computerized simulations, to reveal surprising details of a short-lived early state in a chemical reaction occurring at the surface of a catalyst sample. The study offers important clues about how catalysts work and launches a new era in probing surface chemistry as it happens.

Carbon monoxide (CO), a highly stable, odorless, poisonous gas is one of the by-products of fuel combustion. In the presence of a suitable catalyst, CO molecules will go on to react with oxygen in the air to yield harmless carbon dioxide (CO2) gas. For years, our understanding of the specifics of this catalytic process was rather spotty but now, for the first time, an international team of scientists has taken a closer look at one individual step in the reaction sequence in real-time at the catalytic surface. "Catalysts are used in many industry-relevant chemical reactions so it's definitely worth taking a closer look. In this case, we examined one single fundamental process more closely," says HZB's own Dr. Martin Beye, one of the scientists who has been working on the study.

The researchers examined the process by which molecules of CO detach (or rather "desorb") from a ruthenium surface. Like platinum, ruthenium is a metal that has catalytic properties. Using  ultrashort, high-intensity light flashes at LCLS, a free-electron laser at Stanford University's SLAC, they were able to take snapshots that provided clues about how exactly it is that the CO molecules detach themselves from the catalyst's surface. The scientists determined that roughly one third of the molecules doesn't move away from the surface directly but instead becomes trapped near it in a kind of "transition state." This weak chemical bonding ensures that the molecules are unable to detach yet remain mobile parallel to the surface. The researchers suspect that these types of weakly bonded, activated states might play an important role in catalytic processes.