Light tsunami in a superconductor 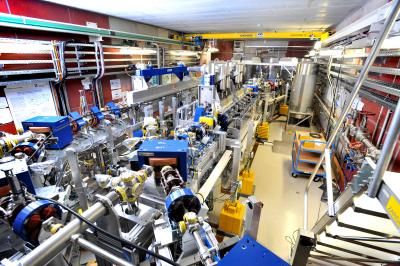 In their latest experiment, Prof. Andrea Cavalleri from the Max Planck Institute for the Structure and Dynamics of Matter at the Hamburg-based Center for Free-Electron Laser Science (CFEL) and Dr. Michael Gensch from the Helmholtz-Zentrum Dresden-Rossendorf (HZDR) investigated together with other colleagues from the HZDR, the United Kingdom, and Japan if and how superconductivity can be systematically controlled. The objective of their research is to improve the usability of superconducting materials for such new technologies as, for example, the processing of information. For this purpose, and for a better understanding of the underlying phenomena, it is essential to increase the critical temperature – critical temperature means that materials below this value are superconducting. Today, most superconductors only function at very low temperatures.

Typically, modern high temperature superconductors are solids which consist of a stack of thin layers, similar to the pages in a book. These layers are conductive and transport electricity. However, no electricity can flow from layer to layer at room temperature since those electrons which are responsible for the current flow can only move freely in the respective layer. If, however, such a layer stack is cooled to the right temperature, then superconductivity occurs along all directions. But there is one difference: While the electrons flow inside a layer without any resistance, these electrons can now also move from layer to layer by "tunneling" through the insulating areas located between these layers. Dr. Gensch explains: "Already the geometry suggests that the mechanisms of superconductivity are different inside and between the layers. We were interested in how the electrons transport this property vertically from layer to layer and/or whether we would be able to control this transport without disrupting the superconductivity in the horizontal layers."

For their experiments, the researchers used one of the HZDR's two free electron lasers (FELBE) which generates laser flashes of a specific, freely adjustable wavelength between the infrared and the microwave range. If such a short terahertz flash penetrates the material layers of the superconductor at the right frequency, then it deactivates the superconductivity very selectively and locally by directly changing the tunneling properties of the electrons found between the superconducting layers. More precisely, the light generates a pair of normal-conducting vortex currents which rotate in opposite directions. These vortices then move through the superconductor with the light. A so-called soliton wave is formed. What's so special about these waves: They always retain their shape irrespective of any faults in the superconductor. This resembles the behavior of such known soliton waves as, for example, tsunamis; the shape of which is also not influenced by any ground dislocations or irregularities.

The vortices moving through the superconductor also alter the optical properties of the material – it becomes slightly transparent. While not for visible light, this is the case for wavelengths in the terahertz regime. The laser flashes last only for a few picoseconds, i.e. the billionth part of a second, so the scientists are able to observe all processes – such as the emergence of the vortices and their soliton movement – directly along this very fast time scale. The team headed by Prof. Cavalleri had successfully achieved something similar already once before. But back then, the scientists had only been able to quickly and consecutively switch the entire superconductivity off and on again between the layers. For the first time ever, the experiment in Dresden successfully managed to switch off the superconductivity very precisely and, above all, also locally – and to stabilize this state almost ten times longer than has been the case before.

In particular, the physicists expect a number of new applications from these light generated vortices inside superconductors. Since they move through the crystal just like a tsunami irrespective of any faults or irregularities, these vortices are perfectly suited to store and transport information inside them. Information is transported within DNA like soliton waves. The experiment, which furnished proof and demonstrated that the vortices can be controlled by laser light, has the physicists in Prof. Cavalleri's team already dreaming about new opportunities for information processing in superconductors.

For a number of years now, intense pulses in the invisible terahertz range (0.1 THz – 10 THz) have been sparking enormous interest among scientists who investigate such so-called complex materials as high temperature superconductors. This is due to the specific properties of this long-wave radiation which has wavelengths between 0.03 and three millimeters. The energy per light particle is so low that the radiation doesn't really interact anymore directly with the electrons in a material, but instead, for example, with the atomic lattice. Sufficiently strong sources have been available for this purpose only for a couple of years now. The strongest terahertz pulses are generated by devices which are powered by electron accelerators.

The HZDR is specialized in a particularly important type of source for material sciences at the Center for High-Performance Radiation Sources called ELBE. While other devices have to take a break after a small series of ultrashort laser flashes, the ELBE sources are able to maintain a constant bombardment. It is actually this continuous sequence of pulses which permits the accuracy that researchers like Dr. Gensch and their guest researchers, such as Prof. Cavalleri, need for their analyses. In order to cover the entire spectral range down to 0.1 terahertz and three millimeter wavelengths, respectively, with even more intense pulses in the future, the HZDR is establishing a new, superradiant terahertz source called TELBE under the supervision of Dr. Gensch. Superradiance means here that extremely intense light is produced in a novel avalanche-like, short process without needing any mirrors as resonators – unlike, for example, free electron lasers. This allows generating even higher terahertz fields at much more flexible repetition rates. Over the next three years, the new TELBE facility will be put into operation and commissioned with the assistance of selected pilot users. The researchers hope to utilize TELBE to unravel new phenomena in the field of materials research as well as life sciences.