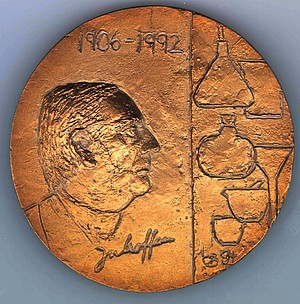 The Inhoffen Medal: the most prestigious German award in the field of natural compound chemistry.

How do bacteria cope when exposed to toxic mercury, how are they able to outlast antibiotics, and how can they be killed using so-called "suicide inhibitors?" These are but a few of the many research topics US biochemist Christopher Walsh has devoted his career as a scientist to. Walsh will be honoured for his achievements in Braunschweig, Germany: The Harvard professor will receive the 5 000 Euro Inhoffen Medal, the single most renowned German award in the field of natural compound chemistry.

The prize, which is funded by the Friends of the Helmholtz Centre for Infection Research (HZI), is awarded on the occasion of the public Inhoffen Lecture, an event co-hosted by the HZI and the Technische Universität (TU) Braunschweig. This year, the Inhoffen Lecture is scheduled for 3 pm on Thursday, 25 April, and will be given in the HZI forum. "The award is bestowed in recognition of Walsh's impressive contribution to science," explains Prof. Dietmar Schomburg, Chairman of the Friends of the HZI.

Bacteria use clever "assembly lines" to make active substances they need to survive. Many of these substances are of medical interest for us humans as they can be used as antibiotics, for example. Christopher T. Walsh, professor at the renowned Harvard Medical School in Boston, USA, is a leading expert in the area of bacterial "factories".

Much of his research has been concerned with the investigation of the structure and function of enzymes, cellular catalysts, to better understand their molecular basis. Among other things, Walsh studied substances known as suicide inhibitors - compounds that, normally, are recognized and converted by some enzyme catalyst. The enzyme mistakes them for natural reaction partners, binds and converts them - leading to production of an inhibitory substance that acts to permanently block the enzyme. Suicide inhibitors that are effective against bacterial enzymes can be continually developed for application in medicine.