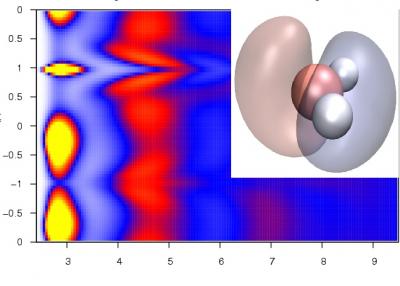 This image shows a 2-D plot of extended structure in electronically coarse grained liquid water showing angular correlations (vertical axis) vs oxygen distance (horizontal axis). The peaks (yellow and red regions) are indicative of an extended hydrogen bonding network -- a signature feature of liquid water. The inset shows the strong electronic polarization of the water molecule that occurs in the liquid where red and blue represent regions of enhanced and depleted electron density.

A research team from the National Physical Laboratory (NPL), the University of Edinburgh and IBM's TJ Watson Research Center has revealed a major breakthrough in the modelling of water that could shed light on its mysterious properties.

Water is one of the most common and extensively studied substances on earth. It is vital for all known forms of life but its unique behaviour has yet to be explained in terms of the properties of individual molecules.

Water derives many of its signature features from a combination of properties at the molecular level such as high polarizability, directional hydrogen bonding sites and van der Waals forces, the attractive or repulsive forces between molecules not related to covalent or ionic bonds.

"Many models exist that can reproduce certain aspects of these properties but there is no 'ultimate model' that can reproduce them all. We have collaborated on a radical new 'bottom up' approach that could help form a more complete model. The research has clear biological applications such as identifying amino acid sequences and computational protein design. Ultimately, this approach could potentially be used for other substances and offers a new framework for simulation of materials at the atomic and molecular scale."

The research, published in Physical Review Letters, explains how a single charged particle, known as a quantum Drude oscillator (QDO), can mimic the way that the electrons of a real water molecule fluctuate and respond to their environment.

This apparently extreme simplification retains interactions, not normally accessible in classical descriptions, and appears sufficiently powerful for the properties of liquid water to emerge naturally under ambient conditions. A realistic liquid is produced with a well-developed network of hydrogen bonds and other properties in close agreement to those of water such as the surface tension and the heat at which water evaporates into steam.