Discovery of an unexpected boost for solar water-splitting cells 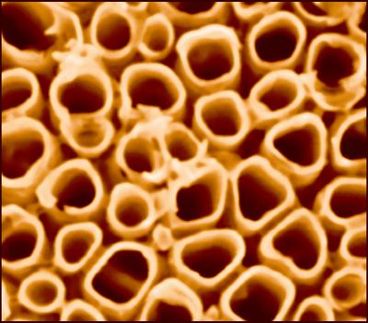 A research team from Northeastern University and the National Institute of Standards and Technology (NIST) has discovered, serendipitously, that a residue of a process used to build arrays of titania nanotubes - a residue that wasn’t even noticed before this - plays an important role in improving the performance of the nanotubes in solar cells that produce hydrogen gas from water. Their recently published results indicate that by controlling the deposition of potassium on the surface of the nanotubes, engineers can achieve significant energy savings in a promising new alternate energy system.

Titania (or titanium dioxide) is a versatile chemical compound best known as a white pigment. It’s found in everything from paint to toothpastes and sunscreen lotions. Thirty-five years ago Akira Fujishima startled the electrochemical world by demonstrating that it also functioned as a photocatalyst, producing hydrogen gas from water, electricity and sunlight. In recent years, researchers have been exploring different ways to optimize the process and create a commercially viable technology that, essentially, transforms cheap sunlight into hydrogen, a pollution-free fuel that can be stored and shipped.

Increasing the available surface area is one way to boost a catalyst’s performance, so a team at Northeastern has been studying techniques to build tightly packed arrays of titania nanotubes, which have a very high surface to volume ratio. They also were interested in how best to incorporate carbon into the nanotubes, because carbon helps titania absorb light in the visible spectrum. (Pure titania absorbs in the ultraviolet region, and much of the ultraviolet is filtered by the atmosphere.)

This brought them to the NIST X-ray spectroscopy beamline at the National Synchrotron Light Source (NSLS). The NIST facility uses X-rays that can be precisely tuned to measure chemical bonds of specific elements, and is at least 10 times more sensitive than commonly available laboratory instruments, allowing researchers to detect elements at extremely low concentrations. While making measurements of the carbon atoms, the team noticed spectroscopic data indicating that the titania nanotubes had small amounts of potassium ions strongly bound to the surface, evidently left by the fabrication process, which used potassium salts. This was the first time the potassium has ever been observed on titania nanotubes; previous measurements were not sensitive enough to detect it.

The result was mildly interesting, but became much more so when the research team compared the performance of the potassium-bearing nanotubes to similar arrays deliberately prepared without potassium. The former required only about one-third the electrical energy to produce the same amount of hydrogen as an equivalent array of potassium-free nanotubes. “The result was so exciting,” recalls Northeastern physicist Latika Menon, “that we got sidetracked from the carbon research.” Because it has such a strong effect at nearly undetectable concentrations, Menon says, potassium probably has played an unrecognized role in many experimental water-splitting cells that use titania nanotubes, because potassium hydroxide is commonly used in the cells. By controlling it, she says, hydrogen solar cell designers could use it to optimize performance.