Taking a look back at the beginning of our universe: QUEST researchers at PTB generate and investigate symmetry breaking in ion Coulomb crystals 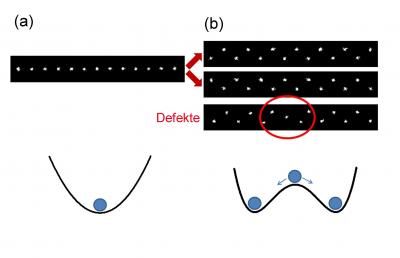 The picture shows ytterbium ions in an ion Coulomb crystal, taken with an EMCCD camera (electron multiplying CCD camera). The ionized atoms fluoresce in the laser light; the distance between the ions is approx. 10µm to 20 µm. (a) Radial symmetry: At a high radial trap enclosure, the ionized atoms line up like a string of pearls. The radial potential felt by the positively charged particles is depicted at the bottom left. (b) Mirror symmetry: If the strength of the radial enclosure changes, the ions become free to avoid each other, and the crystal adopts a new, energetically more favourable structure. Hereby, two energetically equivalent configurations can be chosen from. Areas which do not communicate with each other decide independently of each other on a new orientation. Topological defects occur where two areas which have made different "decisions" collide. The black-and-white images show fluorescing ytterbium ions. 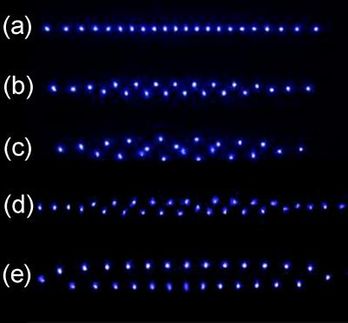 This shows ytterbium ions in an ion Coulomb crystal, taken with an EMCCD camera (electron multiplying CCD camera). The ionized atoms fluoresce in the laser light; the distance between the ions is approx. 10 µm to 20 µm. In the upper rows, different symmetrical ion arrangements (phases) are encountered in the central area of the Coulomb crystal: (a) linear, like a string of pearls (symmetrical to the rotational axis); (b) two-dimensional in zigzag (Z2 symmetry), and (c) as a three-dimensional helix. If, however, a fast transition from one phase to another is induced with force, irregularities occur: (d) localized defect between two areas which are actually symmetrical, and (e) extended defect in which the ions slowly change from one zigzag orientation to its mirror symmetry.

Scientists would love to know which forces created our universe some 14 billion years ago. How could – due to a breaking of symmetry – matter, and thus stars and galaxies, be created from an originally symmetrical universe in which the same conditions prevailed everywhere shortly after the Big Bang. Now, the Big Bang is an experiment that cannot be repeated. But the principle of symmetry and its disturbance can definitely be investigated under controlled laboratory conditions. For this purpose, scientists from the Excellence Cluster QUEST at the Physikalisch-Technische Bundesanstalt (PTB) used laser-cooled ions in so-called "ion Coulomb crystals". They were able to show for the first time how symmetry breaking can be generated in a controlled manner and how the occurrence of defects can then be observed. Realizing these so-called "topographical defects" within a well-controlled system opens up new possibilities when it comes to investigating quantum phase transitions and looking in detail into the non-equilibrium dynamics of complex systems.

Within the scope of an international cooperation with colleagues from the Los Alamos National Lab (USA), from the University of Ulm (Germany) and from the Hebrew University (Israel), PTB researchers have now, for the first time, succeeded in demonstrating topological defects in an atomic-optical experiment in the laboratory. Topological defects are errors in the spatial structure which are caused by the breaking of the symmetry when particles of a system cannot communicate with each other. They form during a phase transition and present themselves as non-matching areas. For their activities, the scientists used the symmetry properties of ion Coulomb crystals which are comparable to those of the early universe.

The experimental challenge for the researchers working with Tanja Mehlstäubler consisted in being able to control a complex multi-particle system and to induce an intentional change in the external conditions to obtain the symmetry breaking. This was achieved by means of ytterbium ions which were trapped in so-called "radio-frequency ion traps" in ultra-high vacuum and were cooled down to a few millikelvin with the aid of laser light. The trapped, positively charged particles repel each other inside the trap and, at such ultra-low temperatures, take on a crystalline structure. Precise ion traps which were developed for metrological applications hereby allow a great control of the ultra-cold particles and of the ambient parameters.

If the parameters of the trap enclosure are varied faster than the speed of sound in the crystal, then topological defects occur (Fig. 2, d-e) while the ions are seeking a new equilibrium condition in the crystal. The stability of these effects was investigated and optimized by means of numerical simulations. This provides an ideal system to investigate the physical properties of symmetry-breaking transitions with the highest sensitivity. Thereby, the spontaneous re-orientation of the Coulomb crystal follows the same rules as those describing the early universe after the Big Bang.

The researchers' work is closely related to the so-called Kibble-Zurek mechanism established by Tom Kibble and Wojciech Zurek. This theory was based on Kibble's thoughts about special topological defects in the early universe: fractions of seconds after the Big Bang, a symmetry breaking took place, and the young universe had to "decide" which new state to adopt. Everywhere where individual areas of the universe could not communicate their decisions to each other, topological defects such as, e.g., cosmological strings and domain walls may have been created. But the Kibble-Zurek mechanism also allows statistic statements on the occurrence of defects in phase transitions in general. Due to its universal character, this theory is applicable to many fields of physics such as, e.g., the observation of the transition from metals to superconductors or the transition from ferromagnetic to paramagnetic systems.

With its work, the international group of researchers has now shown that the Kibble-Zurek mechanism can be transferred to the relatively simple laboratory system with laser-cooled ion Coulomb crystals, and they have demonstrated that the occurring topological defects depend on the speed at which the changes occur. Related experiments which were run simultaneously at the Johannes Gutenberg University Mainz (JGU) led to similar results.

The new system now demonstrated will soon allow further experiments on phase transitions in classical systems and in the quantum universe as well as tests in the field of nonlinear physics (e.g. solitons) to be performed in a well-controlled comparative system. In doing so, the physicists have come one step closer to explaining causal relations in nature.