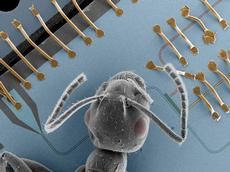 The ant depicted on top of the superconducting circuit illustrates the relative proportions of the macroscopic electrical circuits for the first time used for teleportation.

ETH researchers cannot ”beam“ objects or humans of flesh and blood through space yet, a feat sometimes alluded to in science fiction movies. They managed, however, to teleport information from A to B – for the first time in an electronic circuit, similar to a computer chip.

Physicists at ETH Zurich have for the first time successfully teleported information in a so-called solid state system. The researchers did it by using a device similar to a conventional computer chip. The essential difference to a usual computer chip is that the information is not stored and processed based on the laws of classical physics, but on those of quantum physics. In a study, which is published in the current issue of the scientific journal Nature, the researchers were able to teleport information across a distance of about six millimetres, from one corner of a chip to the opposite one. This was shown to be possible without transporting the physical object carrying the information itself from the sender’s to the receiver’s corner.

”Usually, in telecommunication information is transmitted by electromagnetic pulses. In mobile communications, for example, microwave pulses are used, while in fibre connections it is optical pulses,“ explains Andreas Wallraff, Professor at the Department of Physics and head of the study. In contrast, quantum teleportation does not transport the information carrier itself, but only the information. This is possible due to the quantum mechanical properties of the system, in particular the entanglement established between the sender and the receiver. For non-physicists, entanglement constitutes a ”magic“ link between the two parties which exploits the laws of quantum physics.

As a prerequisite for quantum teleportation, an entangled state is created between the sender and the receiver. After that the two parties can be physically separated from each other while preserving their shared entangled state. In the present experiment the physicists program a bit of quantum information into their device at the sender. Because the two parties are entangled, this information can be read out at the receiver. ”Quantum teleportation is comparable to beaming as shown in the science fiction series Star Trek,“ says Wallraff. ”The information does not travel from point A to point B. Instead, it appears at point B and disappears at point A, when read out at point B.”

The scientists at ETH Zurich have shown that more information is transported from the sender to the receiver in their experiments than possible by classical means. In this way they could prove that the information was indeed relayed by quantum teleportation making use of the laws of quantum physics.

In the experiments of the ETH physicists, sender and receiver are realised as small superconducting circuits on a seven by seven millimetre sized chip. The scientists created the entanglement between the two parties using controlled pulses of microwave-photons. To access the quantum properties of the system, the scientists had to cool the chip to temperatures very close to the absolute zero using Helium.

The distance of six millimetres over which the ETH Zurich researchers have teleported seems to be short in comparison with other teleportation experiments. A year ago, for example, Austrian scientists managed to teleport information by more than one hundred kilometres between the Canary Islands of La Palma and Tenerife. That and other similar experiments, however, were fundamentally different from the one performed at ETH Zurich, because they use visible light in an optical system for teleportation. The ETH researchers, however, managed to teleport information for the first time in a system which consists of electronic circuits. ”This is interesting, because such circuits are an important element for the construction of future quantum computers,“ says Wallraff.

Another advantage of the system of the ETH scientists: It is extremely fast and much faster than most previous teleportation systems. In this system approximately 10,000 quantum bits can be teleported per second. A quantum bit is a unit of quantum information.

In addition, the researchers were able to find a solution for an obstacle of quantum information transfer: in teleportation sender and receiver can be entangled in four different ways – in four so-called Bell-states. Depending on the specific Bell-state the information transmitted to the receiver has to be read out in a specific manner. If that is not done, the correct information is read out correctly only in a single one of the four cases.

The device created by the ETH researchers can deal with this problem. After the information has been teleported from the sender to the receiver, the two parties exchange data about their shared entangled state. In this way the correct information can always be read out in all four possible cases.

In a next step, the researchers plan to increase the distance between the sender and receiver in their device. The scientists say, they will try to teleport information from one chip to another. And in the long term the goal will be to explore whether quantum communication can be realised over longer distances with electronic circuits, more comparable to those achieved today with optical systems.