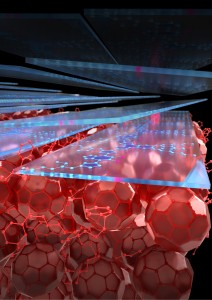 New research from North Carolina State University and UNC-Chapel Hill reveals that energy is transferred more efficiently inside of complex, three-dimensional organic solar cells when the donor molecules align face-on, rather than edge-on, relative to the acceptor. This finding may aid in the design and manufacture of more efficient and economically viable organic solar cell technology.

Organic solar cell efficiency depends upon the ease with which an exciton – the energy particle created when light is absorbed by the material – can find the interface between the donor and acceptor molecules within the cell. At the interface, the exciton is converted into charges that travel to the electrodes, creating power. While this sounds straightforward enough, the reality is that molecules within the donor and acceptor layers can mix, cluster into domains, or both, leading to variances in domain purity and size which can affect the power conversion process. Moreover, the donor and acceptor molecules have different shapes, and the way they are oriented relative to one another matters. This complexity makes it very difficult to measure the important characteristics of their structure.

NC State physicist Harald Ade, UNC-Chapel Hill chemist Wei You and collaborators from both institutions studied the molecular composition of solar cells in order to determine what aspects of the structures have the most impact on efficiency. In this project the team used advanced soft X-ray techniques to describe the orientation of molecules within the donor and acceptor materials. By manipulating this orientation in different solar cell polymers, they were able to show that a face-on alignment between donor and acceptor was much more efficient in generating power than an edge-on alignment.

“A face-on orientation is thought to allow favorable interactions for charge transfer and inhibit recombination, or charge loss, in organic solar cells,” Ade says, “though precisely what happens on the molecular level is still unclear.

“Donor and acceptor layers don’t just lie flat against each other,” Ade explains. “There’s a lot of mixing going on at the molecular level. Picture a bowl of flat pasta, like fettucine, as the donor polymer, and then add ‘ground meat,’ or a round acceptor molecule, and stir it all together. That’s your solar cell. What we want to measure, and what matters in terms of efficiency, is whether the flat part of the fettuccine hugs the round pieces of meat – a face-on orientation – or if the fettuccine is more randomly oriented, or worst case, only the narrow edges of stacked up pasta touch the meat in an edge-on orientation. It’s a complicated problem.

“This research gives us a method for measuring this molecular orientation, and will allow us to find out what the effects of orientation are and how orientation can be fine-tuned or controlled.”