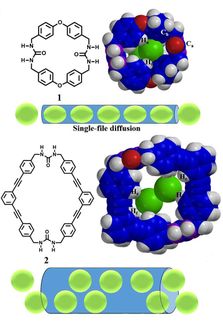 The building blocks that make up Shimizu's 'molecular straws' are cyclic organic compounds, which self-assemble into hollow tubes. The smaller ring (compound labeled 1; top) self-assembles into straws with narrow-bore interiors that can accommodate xenon atoms only in single file.

Chemistry professor Linda Shimizu oversees a series of crowd-pleasing chemistry demonstrations in middle and high schools throughout central South Carolina every year. They are spirited affairs, and her research in the laboratory is just as dynamic -- but with a sense of order that really keeps atoms in line.

Shimizu's lab recently developed a new system for studying gas flow in the most constricted environment possible. She and her co-workers have synthesized tubes so narrow that atoms can only move through them in single file.

Her team builds the tiny tubes by harnessing a process rooted in a molecular kind of self-love. The chemists first synthesize a cyclic organic compound - a molecular doughnut, if you will - that, by design, has an affinity for its own kind. When the molecular doughnuts are dissolved in a solvent and encounter each other in solution, they stack end-to-end like a roll of Life-Savers.

Understanding the fundamental laws of attraction when it comes to molecules, the researchers designed the rings so that they stick to one another. Dissolving the molecular doughnuts results in molecular self-assembly: the rings stack together to create long, hollow tubes made up of about a million rings. They're extremely long straws on a molecular scale.

Shimizu's team has devised the means of synthesizing two different rings that generate two distinct molecular tubes: one has a narrow, oval bore, and the other has a larger, circular bore.

Working in collaboration with Russ Bowers' lab at the University of Florida, Shimizu and her team recently published a paper in ACS Nano that demonstrated the unique gas-flow properties of the molecular tubes.

Using xenon, a rare noble gas suitable for nuclear magnetic resonance (NMR) studies, they showed that the narrow-bore tube has just enough room for the gas atoms to flow through single file. In fact, there wasn't even enough room for that without adding a little pressure.

"The tube's dimensions are actually a little bit smaller than the xenon atoms," Shimizu says. "Under high pressure, the xenon actually gets a little distorted to get pushed in there, and because the samples are so homogeneous the Bowers group is able to really follow it by NMR."

Being able to compare how gas atoms diffuse in the two different molecular straws and understand the fundamental processes involved is an active research area that could have industrial impact in gas separation and membrane technology down the line, Shimizu says. And the two straws that her team has constructed so far are just a beginning.

"We're able to control the size and shape of the straws, and the kinds of functional groups that are in the channels," Shimizu says. "So we can ask some basic questions about how gases flowing through interact with the channel wall. This is just our starting point."