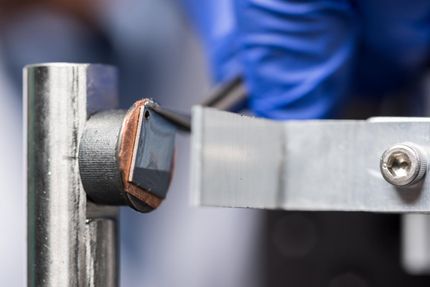 Shown are details of a custom environmental indenter used to test thin film electrodes made of amorphous silicon. The device was used to develop a detailed nano-mechanical study of mechanical degradation processes in silicon thin films.

Anodes based on silicon can theoretically store up to ten times more lithium ions than conventional graphite electrodes, making the material attractive for use in high-performance batteries. However, the brittleness of the material has discouraged efforts to use pure silicon in battery anodes, which must withstand dramatic volume changes during charge and discharge cycles.

Using a combination of experimental and simulation techniques, researchers from the Georgia Institute of Technology and three other research organizations have reported surprisingly high damage tolerance in electrochemically-lithiated silicon materials. The work suggests that all-silicon anodes may be commercially viable if battery charge levels are kept high enough to maintain the material in its ductile state.

"Silicon has a very high theoretical capacity, but because of the perceived mechanical issues, people have been frustrated about using it in next-generation batteries," said Shuman Xia, an assistant professor in the George W. Woodruff School of Mechanical Engineering at Georgia Tech. "But our research shows that lithiated silicon is not as brittle as we may have thought. If we work carefully with the operational window and depth of discharge, our results suggest we can potentially design very durable silicon-based batteries."

The challenge is to get more lithium ions into the anodes and cathodes of the batteries. Today's lithium batteries use graphite anodes, but silicon has been identified as an alternative because it can store substantially more lithium ions per atom. However, storing those ions produces a volume change of up to 280 percent, causing stress that can crack anodes made from pure silicon, leading to significant performance degradation. One strategy is to use a composite of silicon particles and graphite, but that does not realize the full potential of silicon for boosting battery capacity.

In an effort to understand what was happening with the materials, the research team used a series of systematic nano-mechanical tests, backed up by molecular dynamics simulations. To facilitate their study, they used silicon nanowires and electrochemical cells containing silicon films that were about 300 nanometers in thickness.

The researchers studied the stress produced by lithiation of the silicon thin films, and used a nanoindenter - a tiny tip used to apply pressure on the film surface - to study crack propagation in these thin films, which contained varying amounts of lithium ions. Lithium-lean silicon cracked under the indentation stress, but the researchers were surprised to find that above a certain concentration of lithium, they could no longer crack the thin film samples.

"Our nanoindentation and TEM experiments were very consistent," said Xia. "Both suggest that lithiated silicon material becomes very tolerant of damage as the lithium concentration goes above a certain level - a lithium-to-silicon molar ratio of about 1.5. Beyond this level, we can't even induce cracking with very large indentation loads."

Ting Zhu, a professor in Woodruff School of Mechanical Engineering at Georgia Tech, conducted detailed molecular dynamics simulations to understand what was happening in the electrochemically-lithiated silicon. As more lithium entered the silicon structures, he found, the ductile lithium-lithium and lithium-silicon bonds overcame the brittleness of the silicon-silicon bonds, giving the resulting lithium-silicon alloy more desirable fracture strength.