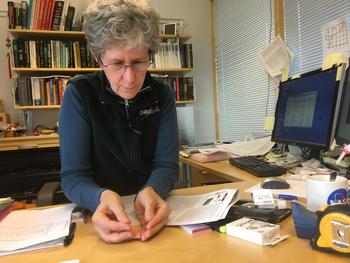 Ursula Gibson, a professor of physics at the Norwegian University of Science and Technology, holds a glass fiber with a semiconductor core. Rapid heating and cooling of this kind of fiber allows the researchers to make functional materials with applications beyond traditional fiber optics.

Glass fibres do everything from connecting us to the internet to enabling keyhole surgery by delivering light through medical devices such as endoscopes. But as versatile as today's fiber optics are, scientists around the world have been working to expand their capabilities by adding semiconductor core materials to the glass fibers.

Now, a team of researchers has created glass fibers with single-crystal silicon-germanium cores. The process used to make these could assist in the development of high-speed semiconductor devices and expand the capabilities of endoscopes says Ursula Gibson, a physics professor at the Norwegian University of Science and Technology and senior author of the paper.

"This paper lays the groundwork for future devices in several areas," Gibson said, because the germanium in the silicon core allows researchers to locally alter its physical attributes.

To understand what the researchers did, you need to recognize that silicon and germanium have different melting points. When the two substances are combined in a glass fiber, flecks of germanium-rich material are scattered throughout the fiber in a disorderly way because the silicon has a higher melting point and solidifies, or "freezes" first. These germanium flecks limit the fiber's ability to transmit light or information. "When they are first made, these fibers don't look very good," Gibson said.

But rapidly heating the fiber by moving it through a laser beam allowed the researchers to melt the semiconductors in the core in a controlled fashion. Using the difference in the solidification behavior, the researchers were able to control the local concentration of the germanium inside the fiber depending upon where they focused the laser beam and for how long.

"If we take a fibre and melt the core without moving it, we can accumulate small germanium-rich droplets into a melt zone, which is then the last thing to crystalize when we remove the laser slowly," Gibson said. "We can make stripes, dots... you could use this to make a series of structures that would allow you to detect and manipulate light."

An interesting structure was produced when the researchers periodically interrupted the laser beam as it moved along their silicon-germanium fibre. This created a series of germanium-rich stripes across the width of the 150-micrometer diameter core. That kind of pattern creates something called a Bragg grating, which could help expand the capability of long wavelength light-guiding devices. "That is of interest to the medical imaging industry," Gibson said.

Another key aspect of the geometry and laser heating of the silicon-germanium fibre is that once the fibre is heated, it can also be cooled very quickly as the fibre is carried away from the laser on a moving stage.

Controlled rapid cooling allows the mixture to solidify into a single uniform crystal the length of the fibre -- which makes it ideal for optical transmission.

Previously, people working with bulk silicon-germanium alloys have had problems creating a uniform crystal that is a perfect mix, because they have not had sufficient control of the temperature profile of the sample.

"When you perform overall heating and cooling, you get uneven composition through the structure, because the last part to freeze concentrates excess germanium," Gibson said. "We have shown we can create single crystalline silicon-germanium at high production rates when we have a large temperature gradient and a controlled growth direction."

Gibson says the laser heating process could also be used to simplify the incorporation of silicon-germanium alloys into transistor circuits.

"You could adapt the laser treatment to thin films of the alloy in integrated circuits," she said.

Traditionally, Gibson said, electronics researchers have looked at other materials, such as gallium arsenide, in their quest to build ever-faster transistors. However, the mix of silicon and germanium, often called SiGe, allows electrons to move through the material more quickly than they move through pure silicon, and is compatible with standard integrated circuit processing.

"SiGe allows you to make transistors that switch faster" than today's silicon-based transistors, she said, "and our results could impact their production."